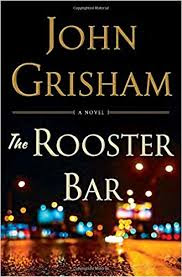 The law students of The Rooster Bar by John Grisham made me feel uncomfortable. Having known and worked with recently graduated Canadian law students for decades, including both my sons, I was disturbed by the willingness of Mark, Todd and Zola to drop out of law school and be fake lawyers. There was a fundamental lack of integrity to their actions.

I appreciate the financial disaster facing them. Collectively they would owe $600,000 in student loans by the time they were to graduate from Foggy Bottom Law School.

At the same time they were willfully blind to the consequences when they went into law school. Every law student I know has assessed the risks and costs against the actual opportunities provided a law degree. It has long been known, especially in the United States, there are no guarantees of a well paid secure position after graduation.

Lawyer jokes to the contrary I consider integrity at the heart of the practice of law.

The students of my experience are much more like the law students in One L by Scott Turow than the students at Foggy Bottom.

I cannot see any of the law students I have known showing the lack of integrity of Mark, Todd and Zola.

On reflection I realized the students of Foggy Bottom are in a completely different system from the students I know.

The students at Foggy Bottom were ill prepared for law school and only realize after admission that the institution is focused on the $45,000 each pays in annual tuition. Professors know their task is to get them graduated. It is almost impossible to fail. Since no one cares about academic performance the students drift through law school and 50% will fail the bar exam.

The students I know excelled in university before they reached law school. They had to show they were superior students with quality LSAT scores. They were motivated to work hard at law school. Their professors challenged them. Their years in law school are illustrated by the reviews of One L written by my son, Michael, and myself that considered our real life experiences in law school in the 1970’s and the 2010’s.

America is often a land of excess. So it has become with law schools, especially for profit law schools, churning out grads unready to be lawyers.

The American Bar Association stated there were 37,400 students commencing law school in 2017. In Canada, with 1/10th of the population of America, there were approximately 2,500 students in first year law school.