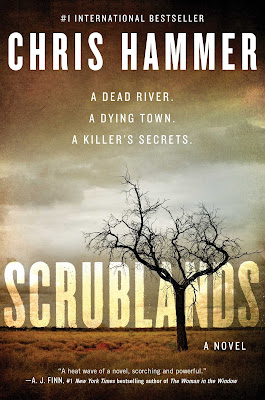 (38. – 968.) Scrublands by Chris Hammer – What an opening. As journalist Martin Scarsden visits with lovely young bookstore owner, Mandalay “Mandy” Blonde she seeks to convince him that local priest, Byron Swift, did not kill five people outside his Church on a Sunday morning because he had been a pedophile. She is certain because he cared:

Martin doesn’t know what to say.
He sees the passion on her face,
hears the fervor in her voice. But a
mass murderer who cared?

Martin is in Riversend, a small town in Australia, suffering from prolonged drought. As in The Dry by Jane Harper the Australian heat dominates the setting of Scrublands.

It is a year after the killing and his editor has assigned him to write a follow up story on how the town is coping.

Martin is 40 years old, acutely conscious of the physical signs of middle age in face and hands, and haunted by the memories of being almost killed in the Gaza Strip where he spent 3 days in the trunk of a car.

In a town uninterested in talking to any journalist he is gifted a Page One story. In his first interview on the killings the local police officer, Robbie Haus-Jones, tells Martin about rushing to the Church after the shooting and confronting the priest and killing him when he raises his rifle and fires at Haus-Jones.

Seeking local colour on the town a year after the shooting he interviews a shabby Harley Snouch, drinking cheap port in a boarded up wine saloon. Such saloons were drinking places for men who were WW I veterans:

They were all over the place, these wine saloons, in the bush and in the cities. Every country town had one. It was different in those days. No Medibank, no Medicare, no cheap medicine. They self-medicated. It weren’t no table wine they served in wine saloons, it was plonk: flagon port and cooking sherry and home-stilled spirits. Nasty, cheap, and effective. This is where they came, the walking ghosts who weren’t welcome in the Commercial fucken Hotel.

Ready to leave Martin is drawn into the life of the community by stepping up to assist community members in a pair of emergencies.

The second involves a bush fire in the Scrublands, an area of wasteland near Riversend. In one of the most compelling scenes I have read in a long time he is caught, with two other men, in a house as the fire sweeps up to and into the house. It is terrifying.

Gradually he learns why the police are being so forthcoming to a journalist.

Swift’s penchants for shooting, drinking, telling dirty jokes and smoking marijuana are incompatible with his position as an Anglican priest. Gradually Martin learns Swift’s pre-Riversend personal history is far more complicated than he had anticipated.

The police, the journalists and the residents are battered by the revelations unleashed when Martin strives to find the answer to the “why” of Swift’s actions. My next post will explore “why”.

When more bodies are found he is at the forefront of a story riveting the nation of Australia. He is riding the crest of a journalist sensation that can return him to fame and even possibly fortune. Yet what will be the costs to personal relationships he has established in Riversend. For his help in two emergencies he has become trusted by the residents.

As information comes his way Martin becomes challenged by ethics. What is ethical as an investigative reporter comes into conflict on what is ethical in personal relationships. Should a journalist play God in telling but some of the truths of a story?

Hammer writes of journalists with such feel for them and the details of their reporting that I knew he had been a journalist before reading of his personal history.

The shifts in the story throughout the book are not so much twists or surprises. They are the unfolding of an intricate, clever and absorbing plot. I was reminded of the complex driving plot being revealed as I read The Girl with the Dragon Tattoo by Stieg Larsson. Hammer's skill drew me deeply into the community and people he created. It takes great talent to provide such drama with, what seems, a casual ease.

Scrublands is a strong contender for my Bill’s Best Fiction of 2018.

Already a great success in Australia I forecast Scrublands is about to sweep onto the bestseller lists of North America. After it is published in Canada and the U.S. in January Hammer had best be ready for a torrent of attention is about to descend upon him.