The Two Sisters of Borneo by Ian Hamilton 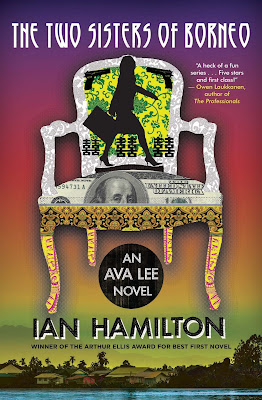 (39. – 969.) The Two Sisters of Borneo by Ian Hamilton – Ava Lee is at the third wedding she has attended in her life. She is maid of honour for her friend, Amanda Yee, who is marrying her half-brother, Michael, in a lavish Hong Kong wedding.

Hamilton provides a vivid description of the ostentatious lifestyle of wealthy residents of Hong Kong. The wedding meal will cost US$700 per person for almost 1,000 guests. Cash gifts to the newly weds are expected to total US$700,000.

At the same time Ava is pre-occupied by Uncle who is dying. The end is coming too quickly for her but taking place in slow motion. While his body fails his mind is as sharp as ever.

Business intrudes upon Ava. May Ling Wong, the business partner of Ava and Amanda, advises Ava that millions of dollars have been lost in one of their business ventures.

The trio had invested $25 million into a furniture manufacturing business in Borneo. It had been owned by two brothers and two sisters. The brothers, more concerned with an expensive and idle lifestyle, had little active role in the business. Their sisters, Ah-Pei and Chi-Tze especially Ah-Pei, had built it into a successful venture.

The business is now on the edge of bankruptcy because it had sold all its $20 million inventory to a long standing Dutch customer. However, contrary to good business practice the brothers agreed to terms that provided no deposit or security.

The Dutch company has now gone bankrupt and there is a secured creditor for $20 million.

The deal stinks and Ava, having retired from “debt recovery” Chinese people around the world, now returns to investigating fraud.

She is soon in the Netherlands where rigid bankruptcy laws give priority to the secured creditor.

When Ava finds out there are essentially no other secured or unsecured creditors she is certain the deal is corrupt. No business goes bankrupt with such an alignment of creditors.

In the Netherlands she finds an interesting private detective, Jacob Smits, a short man rotund and fond of Dutch beer. He undertakes to seek out financial records.

In Borneo Amanda and May Ling hire a lawyer to go after the brothers.

As usual with the series the story unfolds in multiple countries over several continents.

I was glad to see much of the book unraveling financial intrigues.

At the same time violence does play a significant role in the book. I appreciated the violence was not overwhelming.

The triads of which Uncle was chairman for a period of time are always lurking in the background. The series engages in a delicate balance. The scammers cannot be dealt with by conventional legal redress. Yet using organized crime to take them down takes Ava into an informal association with the triads. She has some unease over her relationship with the gangs but they are so useful when violence is the solution.

The Two Sisters of Borneo is engaging and the story flows swiftly. The series is strongly progressive. Readers miss a lot if they just dip into the series. While not a cliffhanger the ending sets up an interesting plot line for the next book.
****
Hamilton, Ian - (2012) - The Water Rat of Wanchai; (2013) - The Disciple of Las Vegas; (2014) - The Wild Beasts of Wuhan; (2014) - The Red Pole of Macau; (2016) - The Scottish Banker of Surabaya