A Gentleman’s Murder by Christopher Huang 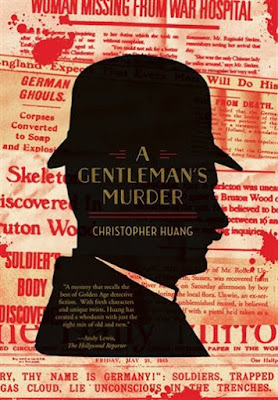 A Gentleman’s Murder by Christopher Huang - Eric Peterkin is the sleuth many of us think we could be if opportunity arose. How many crime fiction bloggers have not dreamed of the chance to become sleuths solving puzzling murders? I am one of those bloggers. And should we be transported by time travel back to the Golden Age of crime fiction to take up the investigation even better. Eric lives out such a dream.


It is 1924 and Eric is spending his days reading at his club, the Britannia Club:


Eric had a job evaluating manuscripts for publication, and lately, most seemed
to be about mysterious deaths behind locked doors.


He sits in “his Usual Armchair” next to a fireplace reading with the occasional drink and discussion with fellow club members. He is filling his time with no real purpose to his life.


The Britannia Club “had but one requirement for membership, aside from being a gentleman: experience on the battlefield in the service of the Empire.” Eric had spent a year in the trenches of Flanders.


There has always been a Peterkin as a member of the club.


Yet Eric is as much tolerated as accepted at the Club. He is half Chinese. (His mother was Chinese.) There is a haughty race and class consciousness that looks down upon the “half-caste” Eric. He is “not properly English”. He bears the slights but is an angry young man.


Through all the English classes there is prejudice against the Chinese. The “yellow peril” is feared. They are a favoured villain in crime fiction of the era.


When the newest member, Albert Benson, is murdered at the club and there is doubt the police will aggressively seek out the killer Eric is ready to take up the investigation.


Aiding Eric is Avery Ferrett who spends his days at the Arabica coffee house occupied with horoscopes and tarot cards.


Eric is precisely logical. While Avery is his friend and assistant, a form of Watson, Eric has no belief in the stars or cards.


The investigation, as common with many post-WW I mysteries, involves events from the war. Eric’s investigation takes him to a vast country home, Sotheby Manor, which was a wartime hospital. (Think of Downton Abbey). All the pivotal members of the Club had connections with Sotheby. Adding to the intrigue a young Chinese woman, Emily Ang, who was working at the hospital disappeared during the summer of 1918.


Ang’s disappearance gained but a flicker of newspaper coverage. Many would equally like public attention to the Benson murder to slip away as quickly and quietly. Eric’s strong sense of duty will not abide a coverup. Despite the disdain and threats he endures.


With the murder having taken place in a locked vault Eric starts with determining how access was obtained. He is thorough and careful.


It is striking how Eric, when physically threatened, can almost instantly revert to a soldier fighting for his life. Eric had thought the War had had little effect upon him. Gradually he realizes his psyche was damaged by the year he spent at the front.


“We’ve all been through hell. And it’s turned some of us into monsters.”


I wish Eric had described and used some of the methods of investigation from the crime fiction he had been reading during his days at the Club. Eric draws upon no fictional sleuths of that era..


I wish Avery had been more developed as a character. He aids Eric but is not a true assistant. Most of the time Eric acts on his own. One of the strengths of the Sherlock Holmes series is the active participation of Dr. Watson.


I cannot recall reading about the status of English / Chinese and Chinese people in England during and after WW I. If anything Canada treated its Chinese residents of that era worse than England. There was discriminatory legislation and Chinese Canadians were not granted the vote until 1947.


A Gentleman’s Murder is a promising start to Huang’s crime fiction career.
Posted by Bill Selnes at 8:26 PM