The Humour of Thomas King 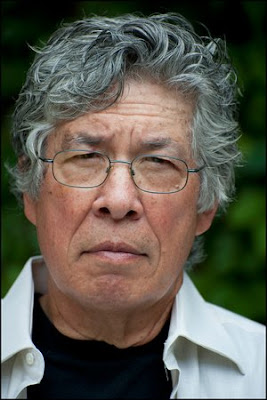 Author, Thomas King, has a talent for writing humour. His skill is evident in DreadfulWater which I reviewed in my last post.


His humour has an edge that I associate with Indian people. It is most evident in conversations, especially if they are with other Indians.

In my review of Shaman Pass by Stan Jones I described it as:

"Jones evokes the playful exchanges between indigenous people - not quite teasing, not really needling, on the edge of sarcastic, occasionally biting, always entertaining."

In representing Indian people for over 40 years I have seen and experienced their jabs. I rarely have had a deft reply.


King’s wit was often present on Dead Dog Cafe Comedy Hour, a CBC radio show that was actually 15 minutes in length. Gracie Heavy Hands and Jasper Friendly Bear joined King who played himself. They were clever in their satiric views of Indian country and its intersections with the white world.


Wikipedia reminded me of a favoured segment:


Here is a link to a podcast of the show which included the Kraft Dinners recipe - https://www.youtube.com/watch?v=GHCoiFcW44Y


There was some consternation within the CBC over puppy stew but the show aired.


In DreadfulWater Thumps arrives at the home of Moses, an Indian elder, well into the night looking for advice:


Moses looked out into the night. “Is it a big problem or a little one?” In
the distance Thumps could hear a coyote working its way across the coulees.


“It’s not exactly a problem.”


Moses nodded. “Then you better bring it inside,” he said. “You never
know when an owl might be listening.”


“That’s what white people do best.” Moses pressed the on button and the
television sprang to life. “They make good movies.” On the television, a
bunch of good-looking men and women in spacesuits were fighting with
a bunch of giant bugs. “Ho,” he said, “I’ve seen this one before. The bugs
almost win.” Moses turned down the sound. “Just like Indians.”


Moses has a unique view of computers:


“My mother could talk to animals.” Moses pushed a button, and one of
the monitors flashed to live. “Stanley can talk to these machines.”


“You know how to work this stuff?”


“Sure, Stanley showed me how.” Moses pressed another button and a
plastic tray slid out of one of the machines.”It’s not hard once you
understand how the Nephews think.”


Moses waved his hand over the computers. “They’re like little kids. They
like to repeat everything you tell them.”


I have always loved the signoff for The Dead Dog Cafe Comedy Hour;