The King of Shanghai by Ian Hamilton 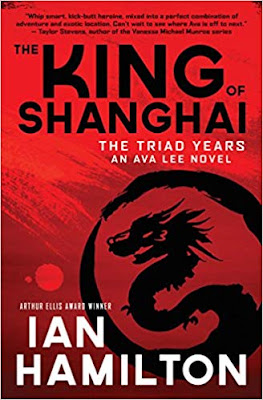 (27. – 998.)The King of Shanghai by Ian Hamilton - Ava Lee is adjusting to life without “Uncle”. Having grieved his death she is ready to move forward in life and business. She decides to exit the debt recovery business she had carried on with Uncle and enter the aggressive and fast moving world of Chinese business.

With millions of dollars inherited from Uncle and a business partnership, the Three Sisters, established with friend May Ling and her sister-in-law Amanda, she is looking for investment opportunities.

Amanda introduces May and Ava to a dynamic sister and brother, Gillian and Clark Po. He is a creative fashion designer anxious to establish his own fashion line under a variation of their surname by converting the “O” into an "O" with an umlaut to suggest sophistication.

On the same trip she goes to Shanghai to meet Xu. He had saved her life in The Three Sisters of Borneo. While he asserts there is no obligation she has a sense of duty towards him. At the same time she is wary of his position as the head of a triad.

Ava is startled when Xu wants to go in business with her. He assures her that he has a large sum of money for investment that does not come from the traditional illegal activities of triads. This money has been earned through copying products developed in the U.S. and Europe.

And then he would like her assistance in setting up a meeting with Sammy Wing, the head of another triad. He believes Ava can be of assistance as Uncle had great confidence in her.

Xu is also looking to become the head of the triads in an upcoming vote.

There are negotiations and treachery and some violence as the series shifts from her the quasi-legal debt recovery business to actual business transactions and connections to the triads.

The current books in the series are becoming a sequence that will need to be read in order unlike the earlier books which could easily be standalones.

While there is no cliffhanger Hamilton has whetted my interest to read the next in the series. I am hoping the violence quotient continues to remain modest. There is enough skulduggery to be found in the corporate world. It further appears that the series is shifting further and further from Ava’s roots in Toronto. Her businesses are in China and Southeast Asia. I do not know how credible it is to have a female adviser to a triad leader, all of the other advisers in the book are male, but it was interesting to see Ava using subtlety and an agile mind in meetings.
Posted by Bill Selnes at 9:29 PM