The Burial Hour by Jeffery Deaver 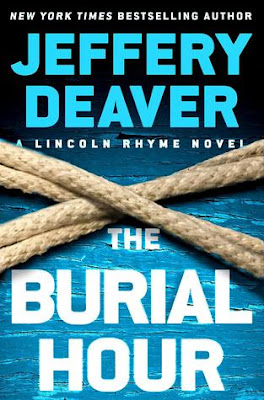 The Burial Hour by Jeffery Deaver - As Lincoln Rhymes contemplates a honeymoon in Greenland a man is kidnapped on the streets of Manhattan. Left behind is a small hangman’s noose made of catgut. Hours later the victim is on a live video being broadcast through YouVid (a thinly disguised YouTube). His kidnapper has him bound and standing on a crate with the noose around his neck. In the background The Blue Danube is being played with gasps being inserted in rhythm - gasp, two, three, gasp, two three. He is using sound from the victim  in the creation of the sound track. The video is signed off as copyrighted by “The Composer.

The Composer is Stefan, a heavy set white man, buffeted by schizophrenia. Treatment is “pretty much limited to drugs, psychotherapy was useless for someone who was far more interested in the sound of words than the content” with words “nothing more than a series of spoken tones that, depending on the doctor’s voice, could be ecstatically beautiful, could downright thrill him or could induce a bout of anxiety thanks to the shrink’s vocal fry.”


He worships Euterpe, a daughter of Zeus, and one of the muses. He believes in the music of spheres:


It was a belief that everything in the universe - planets, the sun, comets,
other stars - gave off energy in the form of audible tones ….


When these tones - whether planets, the human heart, a cello performance - were in harmony, all was good. Life, love, relationships, devotion to the god of your choosing.


When the proportions were off, the cacophony was ruinous.


He has a huge digital collection of sounds.


Stefan is another eerie chilling villain challenging Rhyme in America and Europe.


In Italy a Forestry Department police officer, Ercole (an Italian version of Hercules) Benelli, diligently reads the many warnings from police services as he pursues criminals such as a marketer of counterfeit truffles (they are from China).


He is called by a cyclist to the scene of an abduction. After subsequent officers, higher ranked and more experienced, contemplate the crime scene Benelli stuns the assembled by saying it is a crime committed by the Composer who fled the U.S. a few days earlier. He has recalled the international alert from his daily reading. Lead investigator, Massimo Rossi, invites him to join the investigation. Benelli adds to the positive first impression by emailing the NYPD for help from the crime scene before Rossi has even asked him. Benelli is earnest and awkward and fascinating.


Rhyme and Sachs and his caregiver,Thom Reston, catch a ride to Italy on a private jet. The Italian police and investigating prosecutor want no more than the American files but because of his brilliance Rhyme and Sachs are tolerated by the Italians and venerated by Benelli.


The Composer, skilled in minimizing trace, is elusive.


At the same time, at the request of the American government, Sachs and Rhyme re-examine an ongoing investigation into an allegation of rape against an American university student.


And then the twists start coming.


The title is from an Italian political speech on how many Europeans fear they are being buried by asylum seekers.


Not all sleuths travel well in their investigations. Rhyme is credible and comfortable in Italy. His participation is plausible.