An Ending for The Boat People by Sharon Bala 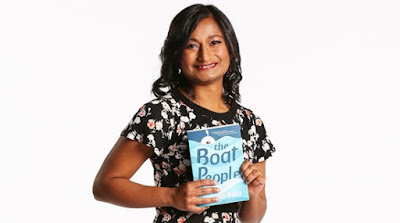 This post definitely
contains spoilers. In particular, it discusses the ending of The Boat People by Sharon Bala.

The Boat People tells the story of 503 Tamils who, fleeing Sri Lanka, arrived off the coast of Vancouver Island. They faced rigorous examination of their refugee claims. The book focuses on the story of Mahindan, a mechanic, and his son, Sellian. As the story concludes Mahindan is about to enter an admissibility hearing that will determine if they are allowed to stay in Canada. To my surprise and regret Bala chose not to tell whether they succeeded.

On her website under the link for Contact Bala provides a link to FAQs where she states with regard to the ending:

Mahindan goes into the admissibility hearing ready to face the future head on. But Canada's refugee system is capricious. So much depends on individual adjudicators' good and bad moods, their ignorance and understanding.  Maybe Grace is feeling generous. Maybe she's in a foul mood ….

Mahindan's entire life has been a series of unlucky and lucky dice rolls. Stories are partnerships, co-created by writers and readers. I left the dice on the table for you to make the next roll. Put yourself in the adjudicator's uncomfortable shoes. You know what Mahindan's done and his motivations. Does he deserve to stay or be deported? You also know the forces and people working for and against him. You've met Grace and Fred Blair and Gigovaz and Priya. So also ask yourself: what do you think will happen to Mahindan and Sellian? Is it different from the judgement you would have made?
I decided to take up Bala’s challenge utilizing my experience as a litigator. I have written the judgment I believe Grace would have written. I took a look at a number of Immigration and Refugee Board decisions to have a sense of format and content. I took a look at Canadian court decisions on refugee appeals. I looked at international law on refugees. I sought to base the decision on the facts presented in the book and the law of Canada. My decision is condensed. A real decision would have been much longer and would be unlikely to have had case citations. Sharp eyed readers may notice that some of my case authorities were given after the time of the fictional admissibility hearing would have taken place. The principles quoted in my decision were already being considered at the time Grace would have been writing her decision. I have sent this post and my review of the book to Ms. Bala. If she responds and is willing I will post her reply.

These are the reasons for a decision made under the provisions of the Immigration and Refugee Protection Act (hereafter referred to as the Act) concerning Mr. Mahindan and Sellian.

The Minister’s position is that Mr. Mahindan was a member or active supporter of the Liberation Tigers of Tamil Eelam (LTTE), an organization that engages, has engaged or will engage in terrorism.

In the alternative, it is the Minister’s position that Mr. Mahindan and his son, Sellian, are not in need of protection if returned to Sri Lanka.

Mr. Mahnidan does not dispute that the LTTE is an organization that has engaged in terrorism, but denies being a member or supporter.

It is his position that both himself and his son qualify as refugees as they are in need of protection.

Mr. Mahindan submits that he should be reunited with his son, Sellian, and admitted to Canada.

The Minister has provided information Mr. Mahindan, at his garage, worked on a bus on behalf of the LTTE that was then used in a terrorist bombing in Sri Lanka.

The Minister asserts that the actions of Mr Mahindan establish that he was either a member or active supporter of the LTTE.

Mr. Mahindan stated that he was under duress from the LTTE to work upon  the bus. He says if he had not worked on the bus he would have been subject to reprisals by the LTTE. He says that he never knew the bus was going to be used for a suicide bomb attack.

He continues that he was never a member of the LTTE nor a supporter of the organization.

The report filed by the Minister includes detailed information on the plans for the bus attack, the work done upon the bus and the actual attack.

What is absent from the report is that Mr. Mahindan was either a member or active supporter of the LTTE.

Ms. Singh asks that I draw an inference that his work upon the bus means he had to be a member or active supporter of the LTTE.

Ms. Rajakaran points out that such an inference would mean anyone who did work for the LTTE or supplied them with goods, including food, would be a member or active supporter.

Ms. Rajakaran submits that there must be proof of membership or clear evidence that Mr. Mahindan was more than a mechanic working on a bus.

I agree with Ms. Rajakaran. Suspicion is not proof. Canada has had a history in wartime of using suspicion of danger to justify punitive actions by governments. Our nation has learned, through painful experience, not to rely on suspicion. To use suspicion is to erode the Rule of Law which is at the heart of Canada’s legal system. I will not return to that dark time when suspicion was considered proof.

There are no records of Mr. Mahindan being a member of the LTTE.

No evidence has been presented that he was active politically. It his evidence, which I accept, that he had no interest in politics.

I reject the Minister’s claim that Mr. Mahindan is a member or active supporter of the LTTE.

Mr. Mahindan asserts that he qualifies as a person in need of protection as he is at risk of torture or risk to his life or risk of cruel and unusual treatment or punishment if he is returned to Sri Lanka.

He refers to his work on the bus. He states the Sri Lankan government has punished Tamils whose work for the LTTE was subsequently involved in a terrorist attack.

He was among the Tamils present at the last stand of the LTTE. Mr. Mahindan has advised that he and his son were compelled by the LTTE to accompany them as they retreated. When Sri Lankan government forces overran the final stronghold it is well established that those who survived were suspected of being members of the LTTE.

Most important he arrived in Canada on a cargo ship from Sri Lanka. Mr. Fred Blair, Minister of Public Safety,  has expressed his opinion that Tamil Tigers were among the passengers.

By Mr. Mahindan’s presence on the ship he will be suspected by the Sri Lankan government of being a member of the LTTE. That conclusion is supported by the decision of X (Re), 2012 CanLII 100150 (CA IRB) where the Board found such suspicion existed for an applicant who had been a passenger on the Ocean Lady, a cargo ship containing Tamils which arrived off Canada in 2010.

In accepting Mr. Mahindan’s assertion he is in need of protection, I adopt the following statement from X (Re):

The UNHCR Guidelines, issued two years ago in 2010,
specifically recommend ongoing protection for those persona
with the following profiles: persons suspected of having
links with the LTTE (emphasis added), journalists and other
media professionals, civil society and human rights activists,
women and children with certain profiles, and lesbian, gay,
bisexual and transgender individuals. As I have found that this
claimant would be suspected of having links with the LTTE on
return to Sri Lanka, I have paid particular attention to risks he
might face.

The full text of the X (Re) decision can be found at:

A further consideration involves Sellian. I accept, as found in Kanthasamy v. Canada (Citizenship and Immigration), [2015] 3 SCR 909, 2015 SCC 61 (CanLII), that Sellian is at risk of discrimination as a young Tamil male if he were returned to Sri Lanka.

Further since the decision of the Supreme Court Baker v. Canada (Minister of Citizenship and Immigration), [1999] 2 SCR 817, 1999 CanLII 699 (SCC) it has been established law that "the decision-maker should consider children's best interests as an important factor, give them substantial weight, and be alert, alive and sensitive to them." I find it is in Sellian's best interests to stay in Canada.

Unity of the family is long established in international law. An example of that principle is to be found in the Final Act of the 1951 U.N. Conference of Plentipotentiaries on the Status of Refugees and Stateless Persons, Recommendation B:

CONSIDERING that the unity of the family, the natural
and fundamental group unit of society, is an essential right of the
refugee, and that such unity is constantly threatened, and

NOTING with satisfaction that, according to the official commentary of the
ad hoc Committee on Statelessness and Related Problems
(E/1618, p. 40) the rights granted to a refugee are extended to
members of his family
,
RECOMMENDS Governments to take the necessary measures
for the protection of the refugee's family, especially with a
view to:

(1) Ensuring that the unity of the refugee's family is maintained particularly in
cases where the head of the family has fulfilled the necessary conditions for
admission to a particular country;

(2) The protection of refugees who are minors, in particular unaccompanied
children and girls, with special reference to guardianship and adoption."

Mr. Mahindan has described the agonizing separation from his son for the many months of his detention. It is time for them to be together again as father and son. I find they are in need of protection and accept their applications as refugees.

(The Government of Canada did not appeal Ms. Nakamura's decision. Mahindan and Sellian succeeded before the Refugee Board. They are doing well in Canada. Mahindan is working full time as an automotive technician and Sellian is happy in school.)
****
Bala, Sharon - (2019) - The Boat People