Florence Kinrade - Lizzie Borden of the North by Frank Jones 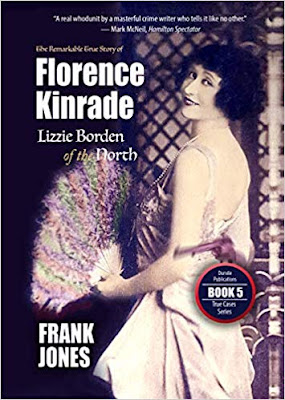 Florence Kinrade - Lizzie Borden of the North by Frank Jones - The Kinrade family was a respectable, upper middle class family in the booming Hamilton of 1909. On February 25 Ethel is shot and killed in the family home. Her sister Florence, the only other family member in the home at the time, reports a tramp wearing a slouch hat robbed her and shot Ethel. Florence’s story is somewhat disjointed.


Mainly because of the family’s social prominence, the father Tom Kinrade is an esteemed educator and real estate developer,  there is no thorough examination of the house and yard. The family returns to live in the home that night.

The initial police interview of Florence is cut short by Tom who insists she has been questioned enough for the day.

Led by the Hamilton Spectator newspaper there is an immediate outcry against the “tramps” plaguing the city. Tramps have been a nuisance for some time knocking on doors and seeking food. There has been the occasional attack by a tramp.

While the Spectator is fulminating against the “tramp menace” police detectives are having doubts about Florence’s story. Her subsequent statements differ significantly from her first statement though some of the variance is attributed to “female hysteria”.

In Florence’s story a mysterious stranger has managed to enter and leave the house unnoticed in the busy neighbourhood. He has shot Ethel though he received the money he sought. He has waited for some minutes for Florence to give him the money after shooting Ethel seven times. She has not noticed Ethel laying on the floor while she twice passed through the room.

And then it is revealed that the 23 year old Florence has been leading a double life. The Hamilton Methodist choir soloist had been performing on the stage in Virginia, the family is unwilling to acknowledge it was vaudeville, under the stage name of Mildred Dale

After a bumbling initial investigation the Government of Ontario turns to George Tate Blackstock Q.C., “a barrister with the reputation of a pit bull”, to represent the Crown at the inquest.

Her father reveals she was seeing an American actor, James Gordon Baum. At the same time she is engaged in Canada to Claire Montrose “Monty” Wright, a Methodist student minister. The family had denied her permission to return to the stage.

Florence is aggressively questioned over three long sessions at the coroner’s inquest into the death of Ethel.

The questioning was unfair and conflicted with her right to silence as a murder suspect.

There is an intense court application seeking, amongst other relief, to end the Inquest.

Through the long hours of questioning no matter how her faltering her memory or incredible her recollections Florence admits to no wrongdoing.

She is followed by Jimmy Baum who is that rare witness. He is simply and completely honest. Though Florence has abruptly ended their engagement he will speak no ill of her.

Few moments in real life court are electric but Jimmy provided one with his closing words:

I should like to tell the coroner and the jurymen that if they think that this girl committed this crime, they’re wrong. If they catch the party who chased this girl from Portsmouth, they will get the one who killed her sister. Tain’t this li’l girl.

A reader cannot help but wonder what her Canadian fiance, Monty, felt at learning, while engaged to Florence, that she had loved another man to the point of engagement.

Blackstock explores repeatedly the contradictions, the inconsistencies and the implausibilities of Florence’s evidence. He establishes she is unreliable, even untruthful. Yet he fails to gain any admission that would be evidence she murdered Ethel. As in the forty plus years I have been a lawyer I have yet to see a Perry Mason moment where the witness says “I did it!”

My next post, to avoid spoilers in this review, will discuss what happened after the inquest.
Posted by Bill Selnes at 7:59 PM