2020 Shortlists for the Arthur Ellis Awards for Canadian Crime Fiction 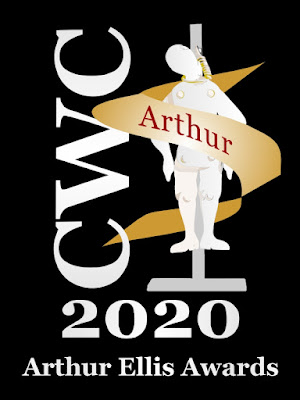 I had forgotten the Arthur Ellis shortlists would be announced tonight when I said this post would be about The Baccarat Case. My next post will be the second post on that book.

With regard to the Awards, as with virtually every part of life, tradition was upended in the announcement of the shortlists by the Crime Writers of Canada. Instead of being announced  at a series of four events held across Canada they were released online a short time ago.

Best Juvenile or YA Crime Book Sponsored by Shaftesbury

Tank & Fitz: The Case of the Tentacle Terror by Liam O'Donnell & Mike Dean
The Grey Sisters by Jo Treggiari
Keep This to Yourself by Tom Ryan
Ghosts by David A. Robertson

The Missing Millionaire: The True Story of Ambrose Small and the City Obsessed with Finding Him by Katie Dobbs
The Billionaire Murders by Kevin Donovan
The Court of Better Fiction by Debra Komar
The Forest City Killer: A Serial Murderer, a Cold-Case Sleuth, and a Search for Justice by Vanessa Brown
Murdered Midas: A Millionaire, His Gold Mine, and a Strange Death on an Island by Charlotte Gray

Bert Mintenko and the Serious Business by B.L. Smith
Henry's Bomb by K.P. Bartlett
One Bad Day After Another by Max Folsom
The Dieppe Letters by Liz Rachel Walker
The River Cage by Pam Barnsley

The biennial Grand Master Award is presented to Peter Robinson.

Out of all the books above I have read but one, The Billionaire Murders.Congratulations to all of the shortlisted books and to Peter.