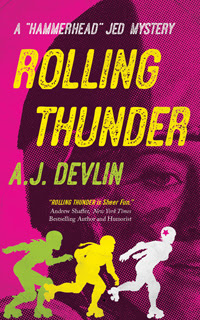 (22. - 1047.) Rolling Thunder by A.J. Devlin – Lawrence Kunstlinger, best known as Lawrence O’Labia in roller derby and as Larry to his friends, is missing. Amazombie aka Stormy Daze aka Stephanie Danielson, Jabba the Slut, Pippi Longstomping and the other members of the Split-Lip Sallies Roller Derby team want Jed “Hammerhead” Ounstead, former professional wrestler and now Vancouver private investigator, to find their coach. The team plays in the Women’s Flat Track Derby Association. (I cannot recall writing a paragraph in any of my previous 1,244 posts with a set of names to rival those created by Devlin for Rolling Thunder.)

Jabba, 300 pounds of intense woman, introduces erself to Jed, who is 6’3” and 240 pounds, with a thunderous slap to his butt by her massive hand that leaves him walking gingerly. He is more upset that her blow caused him to spill his large DQ banana milkshake.

Stormy, the team captain, who rises to 6’3” herself with her skates on, is worried Larry has gotten into trouble over gambling debts.

Tracking down Larry’s bookie is no problem but he will not pass on information about Larry unless Jed undertakes a collection from a longshoreman.

Jed and his cousin, Declan, are soon headed to the Graf Zeppelin club where the bouncer says their attire (“a Henley over a pair of black pants” for Jed and “boots, blue jeans, and a flannel shirt” for Declan) does not meet the dress code. He returns with a “red and black rubber blazer” and “dog collar with large chrome spikes” for Jed and “a pair of black leather chaps, complete with cut-outs in the bum, and adorned with frilly tassels up and down both legs” for Declan. It is a kink club with a BDSM party going on that night.

The images inside on the dance floor and then below in “the best and safest dungeon in the province” are incredible. Having no personal experience of such a club or party I have no idea of the authenticity of the descriptions. Possibly a subsequent reader of the book can add a comment to the blog on the credibility of the club.

Jed returns to the wrestling ring for some stellar action.


When Larry is killed Jed feels an obligation to solve the murder as he did with Johnny Mamba in Cobra Clutch.

Beautiful Vancouver City Police detective.constable Rya Shepard is irritated by his zeal and forcefully tells him to stay out of her investigation. Jed rejects her admonitions and carries on with his investigation. It takes him into corporate skulduggery concerning the future of women’s roller derby.

The amazing characters kept coming including a rabbit, David Hasselhop, who is being bunny sat (could not resist) by Declan while his owner who was wearing a white rabbit costume at the kink club is away on a business trip. The owner is a kinky furry known as Candy away from the club. The rabbit only eats while listening to Shakira songs so Declan croons to Hasselhop.

And who knew there were daschund races in Vancouver?

As resolution nears there are violent episodes showing the prowess of Jed and Declan in hand-to-hand combat. While hardly a surprise Jed would enjoy a good scrap I was caught offguard by his enjoyment inflicting punishment on the bad guys. He believes they deserve the pain.

Devlin clearly loves Vancouver and area. Any writer who relishes Granville Island is bound to appeal to me. Every time I get to Vancouver I have to spend some time on the Island and walk through the Market and get something to eat from several of the great food stalls. On my last trip a leisurely tasting of a flight of beers at the Granville Island Brewery almost caused us to be late for a flight home on a private jet. I was not too worried as we were drinking with one of the owners of the plane.

I hope future characters are less defined by appearance. The good guys of Rolling Thunder look good and the bad guys look bad.

I further wish that Jed’s future cases find him investigating murders that do not involve Rya While conflict in investigations with the New York City police works in the Nero Wolfe stories it is hard to sustain that dynamic credibly through a series.

Until near the end of the book I thought Rya should leave the VPD. She would be an excellent addition to the Ounstead & Son detective agency. Her clever mind would complement the highly phsyical, not always thoughtful, Jed and the numbers skills of his father. And their mutual attraction would add some drama. But the dark edge to Jed’s personality evident late in the book has chilled Rya’s interest in Jed.

The cover for Rolling Thunder is a distinct improvement over Cobra Clutch. I found it a touch misleading for, while roller derby is the focus of the book, the roller girls, except for Stormy, are barely present for, after opening the book, they did not make another appearance in the plot for over 200 pages.

The “Hammerhead” Jed series is rolling right along. There is a wonderful flow to the book that drew me swiftly through the pages. I enjoy being with Jed on his adventures.

I believe Rolling Thunder will be in contention for a 2021 Arthur Ellis Award. I am confident it will do well in the marketplace. It was published on Friday.