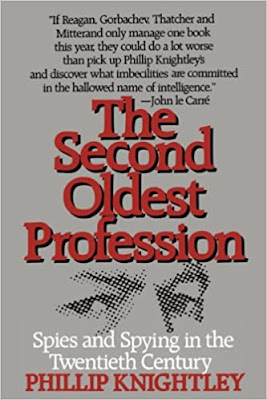 England created its first intelligence agency, the Secret Service Bureau, in 1909 in response to a public campaign asserting there were thousands of German spies in the country. A writer and adventurer, William Le Queux, found spies everywhere for he considered suspicious characters to be spies. The threat was non-existent. Germany’s rudimentary intelligence service was spying on Russia and France. As has often been the case the fear of spies has far exceeded the spying being done.

The priority given the Bureau is demonstrated by its meagre initial budget of 7,000 pounds and being assigned but a single office.

There have been striking individuals in the British Secret Service from the first “C”, Captain Mansfield Smith-Cumming:

…. a genuine eccentric, even by the standards of the Royal Navy. It is difficult to write seriously about Cumming, the first ‘C”, as the head of the service is called to this day. He wore a gold-rimmed monocle, wrote only in green ink, and, after he lost a leg in an accident, used to get around the corridors by putting his wooden one on a child’s scooter and propelling himself vigorously with the other. Visitors were intimidated by his habit of stabbing this wooden leg with his paper knife in order to drive home the point of an argument. His journal, a battered naval log book, contains entries such as, ‘To Clarkson’s today to buy a new disguise’

From the start there have been certain constant themes in the world of espionage:

1.) Spies have a tendency to create false intelligence to justify themselves;

2.) Spies, too often, will use funds assigned them for spying for their personal purposes. and,

3.) There will be competing overlapping intelligence agencies created.

During the Great War little active spying was successful. The most significant information was volunteered and then rejected. The French had the Schlieffen plan for invasion but thought the information was planted. An inquiry into that decision at the end of the war could not proceed as the documents had been destroyed.

There were notable successes in breaking codes and stealing signals but excessive secrecy botched the handling of the information in England and it was not used effectively.

Neither England nor Germany did very well with its intelligence agencies between the world wars.

England’s agencies focused on Russia because of the anti-Bolshevik obsessions of English leadership. It was striking to read that the English secret services did not recruit from major universities during the 1930’s because of the leftist tendencies of the students.

After Hitler took over multiple intelligence agencies, Knightley lists eight, they actively competed for intelligence information and rarely shared with each other any that was obtained.

In the lead up to World War II Knightley does not describe a single European or American intelligence agency that had any significant accomplishments. What they learned that was not public information came from individuals dissatisified with the leadership of their own nations.

In WW II Knightley recounts how England, Germany and the United States had little success in placing agents in enemy nations.

What was even worse was that when important true information reached leadership it was not accepted as it was too good to be accurate and must be disinformation or more often ignored if it did not accord with the pre-conceived thoughts of leaders. The English provided Edgar Hoover at the FBI with information on Japanese intentions to attack Pearl Harbor but he took no notice as he suspected its origins. More famously Stalin rejected Richard Sorge’s warnings from Japan that Germany was going to invade the U.S.S.R. in 1941. What was more surprising was how many other warnings from different sources of intelligence that Stalin equally ignored.


Sorge and his Japanese recruit, Ozaki Hotsumi, not only provided quality intelligence information they worked themselves up in the German embassy in Tokyo and the Japanese establishment to levels that not merely allowed them to obtain information but to influence policy in favour of Russia. In particular, they worked to have Japan respect its neutrality treaty with Russia and not attack the Soviet Union in 1941.

Knightley clearly believes intelligence agencies have rarely succeeded and often been incompetent. It is hard to evaluate the validity of his thesis. He records far more failures than successes. He is prone, as are many authors, to rely on statements made after the fact about state of mind. In an effort to discount the Allied efforts at deception where D-Day would take place he quotes the German officer in charge of military intelligence for the German Army in France that they “were surprised neither by the time of the invasion nor by the place or direction of the enemy advance”. If it were so, the German deployment and reactions should have been far different.

Knightley casts a skeptical eye on England’s success in breaking German codes at Bletchley Park. He downplays the significance of the information obtained through Ultra choosing to emphasize its limitations.

Instead of emphasizing its important role in helping England win the Battle of the Atlantic he mentions the “disastrous” loss of shipping when Bletchley was unable, because of a change in German naval codes, to provide information for 10 months in 1942.

What I had not thought about before was that German Generals might not be honest in their messages. Rommel exaggerated his needs in North Africa to gain at least some of what his army required. The inaccuracte information caused the British Army to take actions which were unsuccessful as the German forces were stronger than expected.

In counterpoint Knightley discusses German efforts at code breaking. He explains the English code breakers were so intent on accessing German messsages they essentially ignored the security of English codes. Germany managed to gain significant access to British messages because of sloppiness and lax security in the processes of coding and transmission.

England was even more casual in checking the backgrounds of young men being considered for English intelligence agencies. It was essentially “bad form” to probe their lives. While this attitude had little effect before 1945 it was devastating during the Cold War because of the number of young English men who were recruited by the U.S.S.R. during the 1930’s.

(My next post discusses the post-WW II portion of the book.)