Murder in the Marais by Cara Black 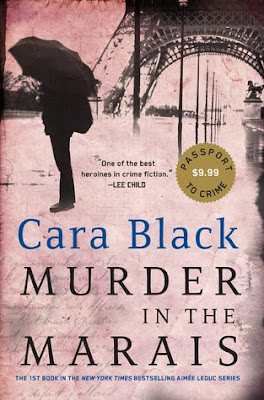 (42. - 1067.) Murder in the Marais by Cara Black (1998) - I have walked by, sometimes glanced at, a few times picked up but never bought an Aimée Leduc mystery until I was in the Westgate Used Bookstore in Saskatoon a few weeks and saw they had Murder in the Marais available for $5.00, half the original price. I brought it home and have been wondering why I did not start reading the series 22 years ago when Murder in the Marais was first published.

In the fall of 1993 Soli Hecht, a Holocaust survivor, wants to retain Leduc, a private investigator, to seek proof a family was not deported to Buchenwald in WW II. She is resolute about refusing to search for missing persons as she is limiting her cases to corporate security until Hecht advises her father had told him to come to her if he needed help. It is a matter of honour. Hecht secretly retains Leduc, there are no records and he pays in cash.

Her hacking skills are challenged by the encrypted document provided her but she finds a way through and there is a photo from Paris of a cafe showing members of the SS and undistinguished civilians.

When she goes to give the photo to the elderly Lili Stern, as agreed with Hecht, she finds Stein dead in bed with a swastika carved in her forehead.

Hecht offers her more money to solve the murder. Now she tells her partner, René Friant, “ a handsome dwarf with green eyes and goatee” that she does not do murder but their finances leave her no choice.

Lili’s son said his mother lived by the motto “Never forgive or forget.” In a breath taking moment he described his mother, as a teenager, at the end of the war, having been missed in the roundup that took her family away, standing day after day after school at the hotel where those who survived the camps arrived back in Paris.

Werewolves, Nazis who went underground after the war, re-appear pursuing the goals of National Socialism.

What happened 50 years ago that could lead to an elderly Jewish woman being murdered?

Aimée carefully probes the world of contemporary fascists. Les Blancs Nationaux are a violent collection of Hitler worshiping neo-Nazis. Have they embarked on killing Jews?

Aimée’s weakness for handsome bad boys puts her at risk.

An aging German man contemplates a love that ended in 1943.

The ancient Marais was long the historic Jewish quarter of Paris. During the war Jews were collected from the apartments and sent to the concentration camps. Some were missed in the collections. Who lived was often random.

There remain dark shadows in France over the Nazi Occupation. Many were not in the Resistance. Some were collaborators. Others were BOF (buerre, oeufs, fromage) engaged in the black market. Consequences will continue for the survivors of the war no matter their age.

Following another semi-American tradition Aimée is a physical sleuth. She is injured several times. As the book neared its conclusion I found myself hoping for more intellect and less violence. She had gone over the edge of credibility issue in how many times can a sleuth be beat up in one book. She does however show the consequences of her dramatic encounters. Aimée has a badly scarred hand from an explosion some years before that killed her father.

The number of bodies in the book was excessive. As I expected, when I read about the author after I was done with the book, Black is American. Whenever I read a mystery with more dead than I would expect for the plot I anticipate an American author. I will read the next in the series in the hope of a lower body count and because of Black’s skill in exploring history and emotion.

There are powerful scenes in Murder in the Marais when the past intersects with the present. Dreams for some can be nightmares for others. We do not often reflect on the meaning of collaboration with occupiers at a personal level. More often the condemnation is focused on the political and econcomic collaborators. Should love exact retribution?

Love lost and a never ending hatred interwine in a complex mystery.