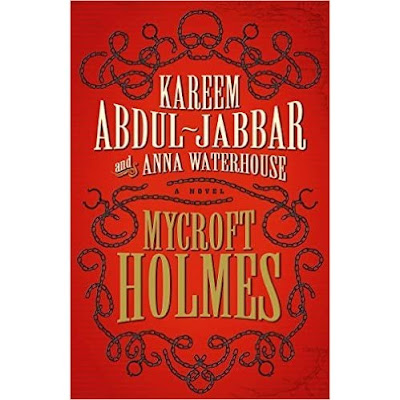 (39. - 1064.) Mycroft Holmes by Kareem Abdul-Jabbar and Anna Waterhouse - In 1870 Mycroft has just started his career in the Secretary of War’s Office and Sherlock is yet a student.

Mycroft is a handsome young man with a powerful intellect and a comparable ego. He brazenly addresses the Cambridge rowing team on how to break a 9 year losing streak in their annual race with Oxford. Backing his words with his money he places a significant bet upon the Cantabrigians. When, of course, he is successful he celebrates the win in style with the finest Cuban cigar and the finest French Armganac at the shop of his friend, Cyrus Douglas.

The money will build his marriage fund. When I learned Mycroft was engaged to the lovely Georgiana I almost gasped aloud. Even if the book had been less than splendid I would have had to read it in full to learn what happened to the relationship. I do not recall from Arthur Conan Doyle’s stories any hint of romance about Mycroft.

When his beloved learns that mysterious deaths involving the supernatural are occurring on her home island of Trinidad she feels compelled to return there.

Mycroft, disconsolate over her departure, manipulates his superior Sir Edward Cardwell, into sending him to Trinidad to investigate purported racial unrest upon the island.

Joining him is his good friend, Douglas, another Trinidadian. The dark skinned Douglas, a man “in his middle years”, takes the guise of a servant to Mycroft. As much as any mortal can be a partner to a Holmes, he works with Mycroft.

I was disturbed when they left London. Too many stories have faltered when their sleuths leave home. Most books are better with the sleuth interacting with the characters and the environment where they are resident.

Yet Mycroft finds fascinating opportunities aboard ship to exercise his deductive skills. It is a subtle adversary who uses poison to incapacitate rather than kill.

His eidetic memory provides him with boundless information for analysis.

Mycroft’s plans to aid Georgiana go awry in a completely unexpected way. The shock is beyond his comprehension. Even his vaunted intellect struggles to understand what is happening. Mycroft has emotions. I doubt Sherlock was ever afflicted with Mycroft’s doubts.

Douglas is no mere able aide. He calms Mycroft in times of agitation and provides solid advice. He is far more an equal than Watson. Were the book written 125 years ago I doubt Douglas would have been given such an intellect. An assistant to a Holmes in Victorian times would have been assigned a lesser role in the relationship with their sleuth.

In Trinidad the intrepid duo find an evil conspiracy I had not anticipated. It is all too credible.

There is a dramatic confrontation that has more violence than needed but consistent with the American tendency to Hollywood. At the same time there is a satisfying use of logic and deduction by Mycroft to solve the conspiracy. Less violence would have made the book perfect.

In a few deft passages Mycroft sets up aspects of Sherlock’s life.

The pages glide by smoothly. There are plausible twists in the plot. I will read more of the series. Abdul-Jabbar and Waterhouse are a skilled team of Holmesians.