The Power Couple by Alex Berenson 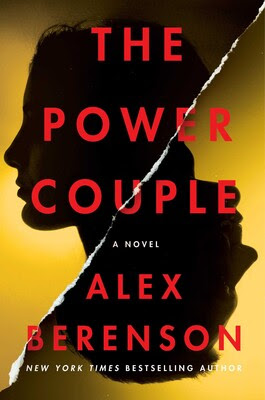 (44. - 1069.) The Power Couple by Alex Berenson - The sense of foreboding began with the first page after the prologue. Kira Unsworth, 19 and pretty, is looking for some family vacation excitement, away from the family, in Europe. Her mother, Rebecca “Becks”, is a long time FBI agent now in counterintelligence and her father, Brian “Bri”, is a coder for the National Security Agency. Brother Tony, a couple of years younger, is an angular awkward teenager. Meeting a charming 26 year old French student in Paris who travels to Barcelona for a date the next night is exciting for Kira. Trouble looms.

When Kira is kidnapped she rationally analyzes her situation. The kidnapping was carefully executed. What value can she be?

The story turned back to how Becks’ life  and how she and Bri reached 20 years of marriage. The trip was an anniversary celebration.

Becks had a traditional family upbringing. Bri was raised by a single mother.

Reading about Becks becoming an FBI agent and her progression through the Bureau while a young mother and wife was fascinating. She is clever and determined. Bri is the primary parent while her career advances. There is a gender reversal in that Becks is the driven one putting work and advancement far ahead of family.

Unlike many fictional marriages Becks and Bri do not toss aside their marriage when they have problems. It was a pleasant surprise to see them work at staying together.

A hundred pages later the plot returns to Barcelona. I remain ambivalent on the length of the back story interlude. The momentum of the start of the hunt for the kidnappers was lost during the  extended time in the past.

When the chase resumes, Rebecca (she is only Becks at home) and Bri draw on American  resources, especially the NSA. America’s ability to surveil the telecommunications of the world is striking and frightening.

Spanish authorities are co-operative. Who wants the fallout from an American teenage girl kidnapped in their country? It took years for Aruba to recover from the disappearance of Natalee Holloway.

And then Berenson tells the backstory of Bri - the perspective of the stay-at-home Dad. He loves being with the kids but is frustrated with his work driven wife. To Bri they have a “fifties-style marriage” with a millennial gender shift.

It was interesting to see Brian's perspective on the marital problems and most unusual in a thriller plot but my interest was drifting until there was a twist that grabbed me and kept me racing through the pages. It was a plausible twist but not one I saw coming.

Berenson is a good storyteller who ratchets the intensity as the plot progresses. There is some Hollywood to the resolution but the thriller aspect never took over the book. The title is apt as “power” applies in many different ways to Becks and Bri. I look forward to reading more of Berenson’s books. (The book will be published by Simon & Schuster in February of 2021.)