The Lions of Fifth Avenue by Fiona Davies 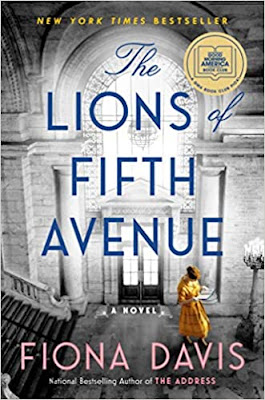 (2. - 1074.) The Lions of Fifth Avenue by Fiona Davies - The proud marble lions of the New York Public Library have welcomed the world since the Library was built in 1911. In 1913 they were called Leo Astor and Leo Lennox after the founders of the library. In 1993 they are Patience and Fortitude having been re-named by Mayor La Guardia in the 1930’s.

I was intrigued that in 1913 the Superintendent of the Library and his family lived inside the library. Laura and Jack Lyons with their young children Pearl and Harry have a 7 room apartment. It is an amazing concept to think of living amidst 1,000,000 books in the heart of New York City.

Laura has been accepted to the new Journalism School at Columbia University but the $85 tuition and $20 for books are beyond the means of the family. She is bitterly disappointed.

In 1993 Sadie Donovan has disdain for the hordes of tourists who come to the Library daily. She wished it was less architecturally impressive. For Sadie, libraries are for serious readers not the gawking masses:

She had enjoyed being on the reference desk in the Catalog Room looking up answers to questions such as “how much horse manure was dumped on the streets in 1880”. She loves her promotion to assistant curator of the Berg Collection where she deals with the requests of “scholars and researchers”.

Back in 1913 Laura gets an unexpected scholarship and becomes a member of the Class of 1913 at Columbia. She is frustrated with assignments for women that involve home and fashion while the men get to write about the major political and social issues of the day. The demands upon all the students by the professors are unreasonable.

There is a crisis as books, starting with a first edition of Walt Whitman’s Leaves of Grass, go missing.

Then in 1993 the last volume of Virginia Wolfe’s diary goes missing from a bookcase which is inside a locked cage.

A chill descends upon the families of both eras. Suspicion, as it must, falls upon the librarians of past and present for they are among the few with unlimited access to the rare books.

To my surprise Sadie is Pearl’s daughter. Born in l906 Pearl is still alive. Frail but alert Pearl is living with Sadie’s brother and wife and daughter - Lonnie, LuAnn and Valentina.

I wished the story from 1993 had not revealed important bits of the 1913 story before they were reached in the 1913 narrative. I love discovering in books what is happening as the characters learn of events. Knowing what is to come dissipates rather than enhances tension for me.

While Laura, having attended university and about to have a career, has opportunities available to few women of her era she is not a modern woman tucked into the past century. She interacts with the feminists and professional women of her pre-WW I era. As the plot progresses she is drawn into the issues of women in her time.

Laura and Sadie each feel compelled to solve the mystery of the stolen books. The books are works of art, symbols of the days when they were published. The literary heritage of the world is diminished by their absence.

It is impossible for the missing books to have been lost or misfiled. To discover who has taken them they must address how they were stolen from secure locations. Thus the library itself becomes a character as each sleuth studies the details of the magnificent building.

The lives and relationships of Laura and Sadie are well explored. They are complex women who love the written word and books. While the marble lions outside the library are male lions it would have been fitting had they been female lions. Patience and Fortitude are apt descriptions of Laura and Sadie.