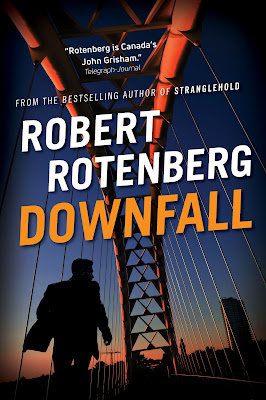 (19. - 1091.) Downfall by Robert Rotenberg - A young Somali immigrant, Jember Roshan, is casually knoc
ked from his bike by an SUV near the Humber River golf course in Toronto. Tumbling down the hillside he lands upon a homeless woman who has just been killed. Another homeless woman wearing a designer coat helps Roshan and then disappears.

Melissa Copeland was a talented corporate lawyer at a big firm in the towers of downtown Toronto. Obsession with work led to marital strife to mental breakdown to chaos. Ultimately she joins the homeless of Toronto to help them. At the same time she tests, often breaches, the restraining orders and bail conditions that deny her contact with her ex-husband, Karl, and his new spouse, Lydia, and her daughter, Britt. In her spiral down Melissa refuses mental health treatment.

Through stalwart representation her defence counsel, Nancy Parrish, has kept her out of jail. Now Melissa insists on a trial for her latest charges against Parrish’s advice for it is likely she will be found guilty and a jail sentence is inevitable. Melissa rejects the advice.

Complicating the situation Melissa, Nancy and Lydia were once the Three Amigas, close friends in law school and at the same big law firm.

In a head spinning moment Ari Greene appears as the Head of the Homicide Division of Toronto Police Services. Two books ago he had left the force after being charged with murder. In the last book he was a construction worker / defence investigator. Now he has not only returned as detective but ascended to leadership of an elite department.

Reflecting his progression within the force Greene’s protege, Daniel Kennicott, is now an experienced detective taking the lead on investigations.

The consequences of the homeless woman’s death become complicated as she is the second homeless person in days to be murdered by the golf course. The method of killing is the same and the killer leaves a signature clue with each body. Is there a serial killer after the homeless?

The prevailing public opinion is that the police conduct but perfunctory investigations of the deaths of the homeless. Greene and Kennicott see no routine murders. Every death gets their full attention. In the words of Harry Bosch “everybody counts or no one counts”.

Should an alert go out to the homeless thousands to be wary? Can they do anything to protect themselves?

With a strong advocate for the homeless being a major character the city’s neglect of the homelessness is a steady theme. Rotenberg moves to the edges of preachiness. Not all homeless are the prominent felled by personal demons.

At the same time Melissa is a striking character. There was a secret to her life  that startled me and twisted the narrative and made the book far better.

The pace accelerates with a meeting at Police Headquarters that surprised, amazed and intrigued me. Prominent defence lawyer, Phil Cutter, delicately manages his client’s disclosure while subtly conveying other information to the detectives. To discuss it more would be too great a spoiler.

As I read the book I tried to see a motive for killing homeless people. Who would have reason to murder the most marginalized of the city? As with many of my favourite mysteries the question of “why” grew greater and greater as I read. I never figured out the motive before the killer was revealed but I had identified the murderer. The motive was credible.

Downfall is the second book that I have read in the past year, the other being An Equal Justice by Chad Zunker, where there is a strong homeless character and a non-stereotypical portrayal of homeless people.

Rotenberg shows how an excellent lawyer / police mystery can be dramatic with neither a gun being drawn by a detective nor a lawyer committing a gross violation of legal ethics.

While Greene remains the lead in Downfall I was glad that the lawyers of Rotenberg’s fictional Toronto had a greater role in this book than in Heart of the City and will discuss balancing the roles of the characters in another post. I think Rotenberg is at his best when he is writing about lawyers and police officers.