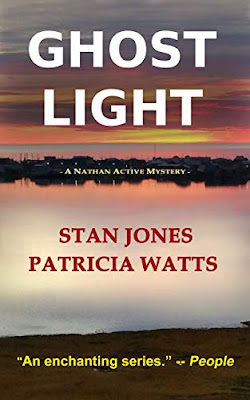 (34. - 1106.) Ghost Light by Stan Jones and Patricia Watts - An elderly woman with dementia, muttering about a whale headed dog monster, brings a piece of human jawbone to Nathan Active, Chief of Police in Chukchi on the North Slope of Alaska. After briefly recoiling, Active regains his composure and starts searching for the rest of the body.

Since her mind failed Tommie Leokuk has taken to roaming about the village at night. In a small community where everyone knows everyone her family thought it less harmful to let her wander rather than have her enduring the agitation that possessed her when she was locked in a bedroom.

Active is recovering from being shot in the leg in Tundra Kill. It is uncertain if his leg will ever be free of pain. His mind is more troubled from the shooting than his leg. His wife, Grace, is worried.

At home life is going well with Grace, his stepdaughter Nita and new son, Charlie. Having a family forces him to think about more than his work and personal demons.

Other bits of the body are brought in by Tommie.

Eventually, through some imaginative police work the body, a young woman, is found.

The investigation takes Active to the oil fields of Prudhoe Bay on the North Slope. At the oil fields workers spend 4 weeks in camp and 2 weeks at home. It is a well paid but isolated life which makes it difficult to involve yourself in a home community. For many years work in the North was dominated by men. Now increasing numbers of women are working in the camps. There are more complications from relationships in and out of camp.

In Ghost Light Active must explore a series of tangled personal relationships involving the murdered young woman. Police work is a challenge when two suspects tell contradictory stories with phone text evidence pointing to each of them equally. Who is the liar? Add a third plausible suspect and there is an excellent mystery.

For readers who live in urban environments the distances of life in Alaska strain comprehension. To question witnesses and suspects Active flies for hours to and from Prudhoe Bay, Nome and Anchorage.

The villagers of Chukchi continue the process of an uneasy adjustment to the economic benefits of large industrial ventures in the North. Going to camp is now far more complicated. Camp can be the traditional place to hunt, fish and gather berries or camp can be the modern place to fix, maintain and operate the equipment extracting oil from the land. Jones and Watts skilfully explore the complexities of evolving life in the North. Modern electronics abound while almost every household has guns and fishing gear.

Beyond the mystery investigation, Active continues to experience his Inupiat heritage. The grandmothers of the North are seers of the soul. Can Nathan, who is reluctant to bare emotions, draw upon their age old wisdom?