The Skull Beneath the Skin by P.D. James 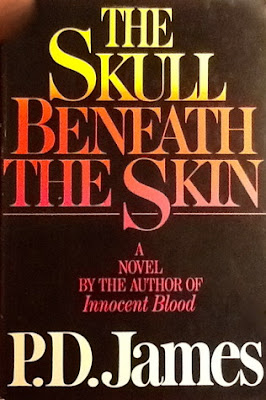 Reading more slowly than usual so I am reaching back for a review written in 2008 that I have not previously posted. Not one of the best books of James but better than many authors.

11. - 421.) The Skull Beneath the Skin by P.D. James (1982) – I had not realized it was her female private detective, Cordelia Gray, who is the heroine. Gray, whose detective agency in London specializes in finding lost pets, is hired to be the companion / protector of actress Clarissa Lisle who has been receiving notes containing quotes from the Bible and classic plays concerning death. The beautiful aging Clarissa, who has failed in several recent plays, is attempting to resurrect her career by appearing in an amateur production of The Duchess of Malfi in a private theatre on the island of Courcy off the Dorset coast. Ambrose Gorringe, a passionate Victorian, has restored the castle and a 100 seat theatre. After arrival they learn of the bloody history of the island including a sordid death in World War II. Clarissa is a manipulator of the highest order with her husband Sir George Ralston (her trophy old soldier), dying theatre critic and former lover Ivo Whittington, stepson Simon, host Ambrose, her sister Roma Lisle and long time servant Tolly. When she is bashed to death all are plausible suspects. The castle room featuring objects and memorabilia of Victorian days is a predecessor of museum featured in her recent The Murder Room. The isolated setting is her preferred choice when not set in London. I unreasonably missed Adam Dagleish in the novel. While I could not get as excited about the characters and plot the solution was deft and fair which I have not always found in her mysteries. (Mar. 9/08)