The Nine by Jeffrey Toobin 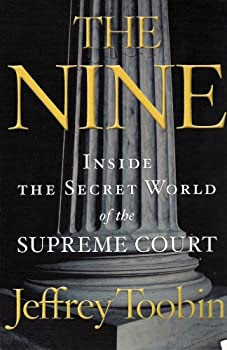 Jeffrey Toobin has just retired from CNN. He was an excellent analyst of legal affairs. Unfortunately, it is hard not to remember his Zoom meeting in the pandemic where he accidentally exposed himself. I will choose to remember him for the rest of his accomplishments. In 2008 I enjoyed his book, The Nine. He is a good example of why people should get second chances. In my review I did not anticipate Republican senators manipulating the nomination process for the Supreme Court to avoid voting on a Democratic President’s nominee in a presidential election year and voting on a Republican President’s nominee in a presidential year. America is ill-served by such manipulations.

15. - 425.) The Nine by Jeffrey Toobin - A worthy successor to Bob Woodward's The Brethren. Toobin goes through the U.S. Supreme Court Justices from the time of Ronald Reagan through to George Bush. We learn of their personal peculiarities (for lunch every day Souter has a bowl of yogurt and a whole apple including core and seeds) and vanities (Scalia has mounted heads of animals he has shot). While 7 of the last 9 appointments were by Republicans there was great disappointment among conservatives. Several appointments such as Stevens and O'Connor were far more centrist or liberal than they wanted. I did not know that O'Connor was actually the key vote during her 20 some years. Toobin obviously admires her believing she best reflected America because of her understanding of the position of a majority of Americans on issues. Rehnquist was Chief but gave up trying to persuade his more liberal colleagues and focused on efficiently running the Court. I continue to be amazed by the vagaries in the nomination process. Clinton haphazardly run through multiple candidates. George W. Bush abruptly looked to his personal lawyer Harriet Meiers when she was not even a candidate. The decisions on the 2000 Presidential election were as partisan as I feared. At the same time Toobin does point out that even on a recount Gore might not have won. It is clear that the last two appointees (Roberts and Alioto) are true conservatives. Unless Kennedy drifts left there is a reliable conservative core that will dominate the Court even if Stevens retires (he remains an active 87 year old jurist). I think Republicans are about to regret their insistence on avoiding filibusters on judicial appointments needing Senate approval. They appear to have forgotten what will happen to forced up and down votes when they are in the minority in the Senate. Excellent. (Apr. 7/08.)