This week I have a series of posts involing  Fool's Republic. Today's post is a set of Questions and Answers with author, Gordon W. Dale, with regard to his thriller. Yesterday's post was a review of the book. Tomorrow I will be posting my thoughts on Gordon's Answers. I will conclude on Friday with an autobiography of Gordon.


****
1.) Have you experienced a closed world of white comparable to the prison of white in which you placed Wyley? 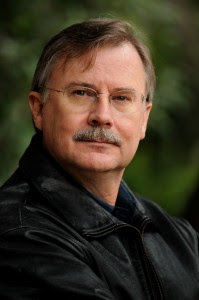 The closest thing to the white world of Wyley's prison that I have personally experienced—and it's a common experience—is being a patient in a hospital operating room. It gives the same feeling of powerlessness and, of course, you’re bathed in bright light and subjected to forces beyond your control.
When I started writing Fool’s Republic, I knew it was likely that Wyley would be subjected to some sort of sensory deprivation. The choice was to place him in either an unlit room, like a dungeon, or a room of white light. Of the two, I find the idea of unrelenting white light far more sinister.
I started with the first line: “I float in an eight-by-eight cell of the purest clinical white: white walls, white sheets, white toilet, white sink, white light.”, and then wrote the character into existence, figuring out who he was and what was happening to him as I went along. I think this sense of discovery is transferred directly to the reader. Many readers have told me they sped through the book in a couple of days; some have read it in a single sitting, staying up all night to do so. And reviews of the book commonly talk about how gripping it is.
2.) In creating Wyley were you thinking of the privileged children at the core of the SDS (Students for a Democratic Society) who adopted violent protest against the American establishment a generation ago during the Vietnam War?
That’s an interesting question. While there are similarities between the way Wyley felt about society when young and what the students who comprised the SDC probably believed, Wyley didn't take direct action. Instead he dropped out. It wasn't until he was quite a bit older, and a tragedy he blamed on the government befell him personally, that he decided he had to do something concrete. Up to that point he just wanted to be left alone.
3.) Why was Wyley a middle aged white man when the War on Terror has concentrated on young Arabic men who are often immigrants?
While it's true that there has been a focus on male immigrants of Arab descent, particularly by the media, I believe the war on terror has been a war on all of us. We all live in a world where our freedom has been compromised in the name of security. What happens to Wyley could happen to any of us, regardless of race or background. Bradley Manning is a current example of that. That was one of the points I hoped to make.
4.) A couple of years ago I read The Torture Team by Phillipe Sands. Your book reminded me of his descriptions of the environment and interrogations at Guantanamo. Was America’s Cuban prison an inspiration for the book?
I'm pleased the prison seemed authentic to you, because I felt that whatever happened to Wyley had to be believable. However, while the novel is certainly informed by Guantánamo Bay and Abu Ghraib, Fool’s Republic is not a piece of reportage. The institution in which Wyley finds himself is not modeled on any particular prison—mostly because I didn't want to get caught up in trying to reproduce each institutional detail with complete accuracy. Wyley is held in a prison that might be. I was looking for a context in which I could explore the uses of, and resistance to, authority.
5.) As a lawyer and a reader I am interested in words. Your book with words such as “aleatory” and “teleological: and “deontology” has more unfamiliar words than any recent work of fiction I have read. Are these words part of your vocabulary or did you seek them out for Fool’s Republic?
Certainly I seldom use “aleatory” and “deontology” in everyday conversation, although they are words I'm familiar with. I've read a considerable amount of philosophy over the years and as Fools Republic is written from the point of view of a character with an interest in that field, I chose words I felt were appropriate to the way he would think about and describe situations. He uses words as a defense, as a way to distance himself from the people around him, particularly people in authority. In that regard, his use of language is an important facet of his character.
6.) Could the book have been set in Canada?
Being born in Canada, I would like to say not. I still find Canada to be a kinder and gentler place in most respects. Mind you, it would have been inconceivable to set Fool’s Republic in the United States of a generation ago, so I suppose it doesn't do to become complacent.
Posted by Bill Selnes at 2:00 AM

Email ThisBlogThis!Share to TwitterShare to FacebookShare to Pinterest
Labels: Questions and Answers