Today I start a series of four posts involving Fool's Republic and its author, Gordon W. Dale. Today is a review of the book which was provided to me by Caitlin Hamilton of Caitlin Hamilton Marketing & Publicity, LLC. Tomorrow will be a post of Questions and Answers with Gordon. On Thursday I will post my thoughts on the Answers. Friday will be Gordon's autobiography. 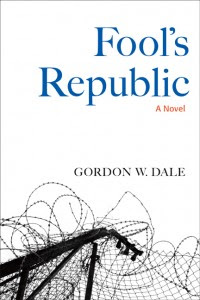 26. – 585.) Fool’s Republic by Gordon W. Dale – I associate prisons with grey or institutional green. Drab, even dreary, the prisons I have visited feature dull colours. In contrast, Simon Wyley is imprisoned in a world of white. From walls to ceiling to floor to clothes to light 24 hours a day he is enveloped by white. The prison of white is just as sterile and dehumanizing as the conventional prison of grey.

Wyley has been cast into one of America’s new secret prisons where those persons, the authorities fear threaten her security, are held captive without rights.
The book gradually unfolds Wyley’s difficult life as he faces varied forms of interrogation. Born with a restless rebellious nature he mocks the conventional and the blue collar working representatives of the establishment. Wyley does not appear to recognize his youthful elitism and hypocrisy relying on the generosity of his mother.
His resistance to his examiners is clever as he draws upon a lifetime of intellectual exploration. I was challenged to think about how I would fare facing interrogators determined to gain answers by any means.
Viktor Frankl, in Man’s Search for Meaning, spoke of hope sustaining those who survived the Nazi concentration camps. To lose faith in the future was to lose life. Most comfortable alone, Wyley copes better with his solitary confinement than more social people.
Has America become a land so fixated on homeland security that the cherished rights and freedoms that have sustained her citizens for over two centuries are abandoned? Dale offers a chilling assessment of 21st Century America.
Recently I was in Germany where I spoke with a German lawyer about the Nazi takeover of his country. The Rule of Law was thrown aside when the Nazis perverted the German judicial system. He expressed unease over the development of secret courts in the United States. I stated it was America’s public courts that restrained the legal excesses of the internal War on Terror. He remained concerned for America’s future when confidential charges and proceedings become part of the judicial system.
What should the process be for dealing with those alleged to have threatened a nation’s security? In Canada we have watched how our security service not so tacitly provided information to the United States that sent an innocent Canadian citizen, Meir Arar, to Syria where he was tortured and abused. We have also had a mainly public trial in Ontario where several Muslim men were convicted of planning to commit violent terrorist acts.
While I admire Wyley’s fortitude he is a challenge to like as he is so wrapped up in himself. There is only one unreserved relationship in his life. Dale has created a real hero afflicted with real flaws.
The ending was brilliant and unexpected. It is the rarest of thrillers, a reflective work, neither dependent on gun nor bomb to create suspense. I will be thinking about Wyley and “the land of the free”. It is an excellent book. (May 19/11)
Posted by Bill Selnes at 1:00 AM