The Language of Bees by Laurie R. King 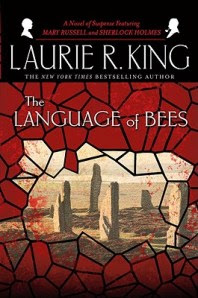 27. – 490.) The Language of Bees by Laurie R. King – As Sherlock Holmes and Mary Russell return to England after several months abroad in 1924 Sherlock is contacted by his son, Damian Adler, who is the son of the late Irene Adler who bested Holmes in the story, A Scandal in Bohemia. It is striking premise. Holmes did not know of Damian, who was a French officer, until after World War I. Damian is a brilliant surrealist who has returned from Shanghai with a Chinese wife Yolanda and, the suprises continue, a daughter Estelle who is Holmes’ granddaughter. Yolanda moves from religion to religion seeking a spiritual home. In London she becomes involved with the Children of the Light. They are a mysterious religion, really a cult, following the “Master” who has written Testimony, his Bible which is amalgamation of religious traditions including Christianity and Norse mythology. Russell and Holmes examine killings at pre-historic religious sites around Great Britain. The investigation is better than some of her recent books. The mystery plot was predictable. The additions to Holmes’ life are brilliantly done. The book does not have the depth of some of her earlier mysteries. While I forsaw the denoument I did not foresee the ending. It is a step back from The Art of Detection. Good. Paperback. (July 19/09)
Posted by Bill Selnes at 12:05 AM