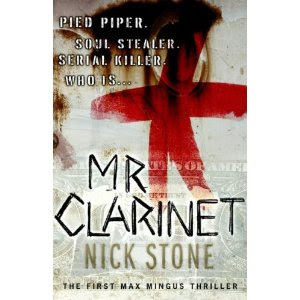 Mr. Clarinet by Nick Stone – The book has been sitting on the TBR pile for a lengthy period of time. It is a challenging mystery.

Max Mingus, private detective and former Miami Police Department officer, is being released after 7 years in jail for killing a trio of thugs who had brutalized and killed a young woman. He is also struggling to deal with the unexpected death of his wife, Sandra, while he was still in prison.
The wealthy Carver family wants him to come to to search for Charlie Carver who was three years old when kidnapped two years earlier. Initially, Max repeatedly declines but after his release goes to to take on the case. He is not yet ready to be alone.
It is late 1996 shortly after the and U.N. have intervened and have troops stationed in the country. Stone describes a of incredible desolation. The countryside has been devastated by deforestation. In the infrastructure of the city has collapsed. Much of the city is a slum. Amidst the utter poverty the Carver family lives comfortably insulated from the people.
Mingus understands it is a risky investigation. Of the two previous American private detectives who had attempted to find Charlie one had been viciously killed and the other wished he was dead.
Max begins his investigation with the aid of the beautiful Chantel, a trusted employee of the Carvers. Almost immediately he encounters the voodoo culture prevalent in the country. Most people believe in the power of practitioners of black magic. There are rumours of a mythic figure Tonton Clarinette who lures young children. It was shocking to read children may be sacrificed for certain rituals.
The Carver family has dark secrets. Mingus is in an uneasy relationship with the family as he seeks the missing child. in an employee is a foreign concept to the rich.
Mingus is part detective, part vigilante, part avenger. He operates well in a country where the Rule of Law is a distant academic concept. At the same time I struggle to accept a hero who so readily, even casually, accepts violent action and cruel death.
I am not sure whether I will read the next book in the series. is, without doubt, the most depressing country I have read about in mystery fiction. Yet the primary reason for my hesitation was the extreme graphic violence in certain scenes which caused me to put the book down for a few days. At the same time Stone is a gifted writer who creates interesting characters and a vivid plot. It is not a book for the sensitive book lover. (Nov. 22/11)
Posted by Bill Selnes at 12:54 AM