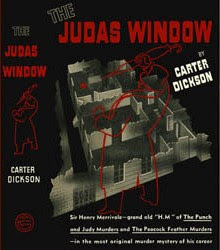 68. – 628.) The Judas Window by John Dickson Carr writing as Carter Dickson (1938) – James Answell has come to London to meet his future father-in-law, Avory Hume. Uneasy about the interview he gingerly enters the office at the back of Hume’s house. The former banker has fortified the room. There are steel shutters on the two windows. The only door is heavy and tight fitting.

As they start their conversation Answell spins into unconsciousness after taking a drink from the whiskey and soda poured for him by Hume. When he awakes Hume is dead beside the desk an arrow driven 8 inches through his chest. The arrow had been part of a display on the wall behind the desk. Answell’s fingerprints are on the arrow and dust from the arrow on his hand. Hume had been an accomplished archer with the Woodmen of Kent.
Compounding Answell’s problems there is no sign that any whiskey and soda had been poured and, worst of all, the door has been locked from the inside with a stiff dead bolt.
No one is accepting Answell’s explanation that he was drugged and framed. He is soon in the dock at the Old Bailey facing a capital murder charge.
Answell insists Sir Henry Merrivale, K.C. (better known as H.M.) defend him though the veteran court warrior has not tried a case in 15 years. Merrivale could have been a prototype for Rumpole of the Bailey as portrayed by Leo McKern. Both are aging, aggressive, blustering, colourful barristers who enjoy a cigar.
The evidence against Answell is straightforward and devastating. Merrivale is facing a set of facts that would have called out for a guilty plea was not the gallows the punishment.
The examination and cross-examination of witnesses are very well handled. The rules of evidence are followed. I was surprised to read that while Carr was the son of a lawyer he was not a lawyer. Few non-lawyer authors are as skilled as Carr in knowing what can actually be said in examination, cross-examination, re-examination and argument.
Merrivale’s defence is predicated on the room having a Judas Window but the only windows are locked and shuttered. (In England a Judas Window is a type of prison cell window where guards can see a prisoner without being seen by the inmate.) Dickson has created a locked room which would challenge any defence counsel not a mystery writer. As a mystery reader I certainly saw no solution.
After careful investigation Merrivale challenges pieces of evidence. An alternative to Answell stabbing Hume with the arrow is offered. Yet how will Merrivale show the murder took place within the locked room without Answell committing the crime?
By the end of the book Carr has provided a plausible explanation and solution that could have been determined by a reader who is rigorously logical in reviewing the evidence. As with many solutions it requires elimination of what is impossible and then a determination of how what is not impossible could have been done. I neither came close to figuring out how the murder was done nor the identity of the killer. 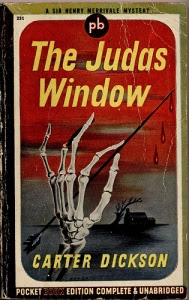 Through blogging I have become more interested in Golden Age mysteries. I enjoyed Carr’s book Death Turns the Tables. It was a good book. The Judas Window is a great book. Sergio in his blog Tipping My Fedora had an excellent review of The Judas Window that prompted me to look for it in bookstores. His review includes interesting information from other sources about the book. As noted in a previous post J.D. at Sleuth of Baker Street in Toronto found a copy for me. It is a fine hardcover 2nd edition from 1938. I am going to look for more Sir Henry mysteries.
I liked the cover at the top of the post which was on my copy and features a diagram of the locked room. On the other hand the cover here at the bottom of the post would be the one to get my attention in a bookstore. (Dec. 13/11)
Posted by Bill Selnes at 7:32 PM