Diefenbaker for the Defence by Garrett Wilson and Kevin Wilson 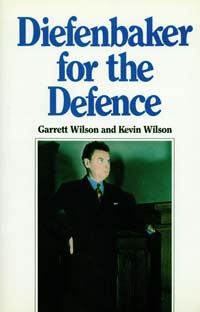 Diefenbaker for the Defence by Garrett Wilson and Kevin Wilson – John George Diefenbaker was a defence counsel in rural Saskatchewan for over 35 years before he became Prime Minister of Canada in 1957.


The biography, while covering his life until he became P.M., is focused on his trials in the courts of Saskatchewan.


Last year I read the Moonlight Murder Mystery: An Adventure of the Young John Diefenbaker by Roderick Benns. I followed up with a post on my personal contacts with Dief the Chief. (My last post was a review of Garrett Wilson’s legal fictional mystery, Guilty Addictions, and information on his life.)


After a somewhat mysterious medical discharge from the Canadian Army in WW I Diefenbaker was able to use a soldier’s exemption to accelerate his articles so that he became a lawyer at 24.


His first office was in Wakaw which is 85 km down the road from my home in Melfort. (Readers of the blog will recognize Wakaw as the real life town featured in the small town Saskatchewan mysteries of Nelson Brunanski.)


Diefenbaker, while frail in appearance as a young man, had piercing eyes, a powerful voice and a commanding formal presence that served him well in the courtroom.


When his legal career began most of the residents of Saskatchewan, other than First Nations peoples, were immigrants from all the nations of Europe. Around Wakaw a majority of the newcomers were either Slavic or French.


Soon in demand Diefenbaker defended cases throughout our region. It was interesting to read of cases that took place in courthouses in which I have argued cases, including Melfort where I live.


An early prominent case arose on Christmas Day of 1929 when Antena Kropa died after being shot in her home in Humboldt. Beside her was the wounded Alex Wysochan. Her husband, Alex, claimed that a drunk Wysochan had threatened them. As Alex fled the house through a window to get help he heard 3 shots fired. Wysochan retained Diefenbaker to defend him. The most obvious defence was to plead drunkenness. If successful, the defence could not produce an acquittal but would reduce the conviction from murder to manslaughter. Diefenbaker, for reasons not clear in the book eschewed the drunkenness defence and went for an acquittal claiming Kropa had shot his wife and Wysochan. It is hard to know whether Antena and Wysochan being lovers helped or hurt the defence. I think Diefenbaker, an aggressive counsel, was overconfident of his ability to convince a jury, even if the facts for his defence were weak. It proved a fatal decision for Wysochan. The defence was unsuccessful. Wysochan was convicted and hung.


The case illustrates when I am grateful, as a lawyer, Canada does not have the death penalty. The decisions made by a defence counsel in a capital case can have life and death consequences. I am not sure I could defend someone with that responsibility upon me. Diefenbaker does not seem to have been excessively traumatized. He carried on with his legal career.


While immediately a successful lawyer Diefenbaker was an unsuccessful Conservative Party politician for almost two decades. His political career was adversely affected by the presence of the Klu Klux Klan. In the late 1920’s and early 1930’s the Klan had a loud, though fortunately non-violent presence, in Saskatchewan. While not a member of the Klan, Diefenbaker did not effectively distance himself from the Klan when it was actively supporting the Conservative party


Justly famed for his criminal defence work, Diefenbaker also took on civil cases. When the famed naturalist, Grey Owl, died in northern Saskatchewan the public learned he was an imposter. Archie Belaney was not Indian but an English immigreant. Diefenbaker became involved in a court case over his estate. Belaney had lived a complicated family life. Publicly he had lived with Anahaero and she had borne them a child, Shirley Dawn. He had also gone through a marriage to Yvonne Perrier. After death it was determined he had never divorced his first wife, Angle Belaney. Diefenbaker unsuccessfully sought to eliminate Angle’s claim on the basis she had been unfaithful after Archie deserted her. The Court dismissed the argument justly pointing out Archie had left her, neglected her and their children and lived with other women.


The book is at its best analyzing Diefenbaker’s conduct of trials. His skill in final arguments drew full courtrooms to hear him. By the time I graduated from law school in the mid-1970's Diefenbaker had spent a generation away from the courts of Saskatchewan but he was still highly regarded as a defence lawyer. (July 29/13)
Posted by Bill Selnes at 12:03 AM