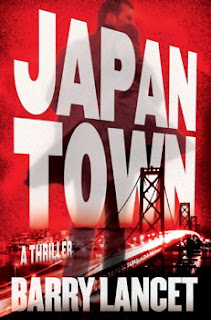 55. – 744.) Japantown by Barry Lancet – The best new thriller author of the year came my reading way in December courtesy of Simon & Schuster. Lancet has written an intricate action filled mystery.


Jim Brodie is summoned to a horrific crime scene in the Japantown area of San Francisco by SFPD Lieutenant, Frank Renna. A family of 5 Japanese tourists, including 2 young children, have been gunned down. The crime scene has yielded no leads to the police. The SFPD consults Brodie when there is a Japanese aspect to a crime.


Brodie, primarily a dealer in Japanese art and antiques in America, is also co-owner of a Japanese security firm founded by his father. He had spent his first 17 years in Japan before being brought to the U.S. by his mother when the marriage of his parents failed. His father, Jake, had stayed on in Japan to run the security firm.


While examining the area around the bodies, Brodie is startled to see a kanji character on a piece of paper and then stunned when he recognizes the kanji as the same as the kanji written on the sidewalk outside the house in Los Angeles where his wife, Mieko, had died.


Kanji were the basic building blocks for the Japanese writing system – complex, multistroke ideographs borrowed from the Chinese hundreds of years ago.


A shiver went up my back when the author revealed that the police and Brodie are being carefully observed from a distance by members of the killing organization – Soga. Within minutes they have identified Brodie.


On returning to his apartment Brodie is cheerfully greeted by his 6 year old daughter, Jenny, who has come downstairs from a sleepover. When she tells Brodie she has been talking with a China man, Brodie rushes out of the building to talk to the Homeboy intruder. The conversation turns to confrontation and Homeboy draws a knife. Only Brodie’s skills in multiple martial arts save him from death.


When the wounded Brodie returns to the apartment Jenny is distraught. Seeing her father bleeding, she panics frantic with worry, that he will leave her like her mother has left them. Brodie manages to calm her though she remains uneasy.


With nothing but the kanji character as a lead Brodie considers how to pursue its meaning Despite extensive research after his wife’s death Brodie had never been able to identify the kanji. He had consulted experts in the United States and Japan. He had searched dictionaries. He had gone through databases.


His only lead had come from an elderly Japanese man at a university in Kagoshima who said the same character had been found at two murder sites in Japan but had provided no further information.


As he renews his search into the character Brodie is surprised at his shop by the appearance of Japanese telecom billionaire, Katsuyuki Hara, who is a renegade in Japanese business for his individualistic style of business. He does not conform to the Japanese tradition of working together.


Hara has sought out Brodie to investigate the murder because it was Hara’s older daughter and her family who were slain. Brodie accepts the retainer for a private investigation but makes it clear to Hara he will continue to be a police consultant.


It is clear that the answers to the murder are in Japan. Unlike most thrillers Brodie must deal with leaving a young child to go to Tokyo. While able to convince Jenny it is one of his usual business trips Brodie is sad to part from her. The story touches upon the consequences of a family man undertaking a dangerous case. Should the father of a child take such risks?


As the investigation proceeds the level of action increases as it should in a thriller.


The story delves into Japanese history. Because I do not want to go too deep into the story my next post will explore, without spoilers but at more depth, an historical aspect of the story and my one regret with the book.


Earlier this year I found Red Sparrow by Jason Matthews very good. While the book did not become the blockbuster I expected it did very well. Japantown is better. Imagination and action are balanced. There is clear insight into Japan – culture, people and history. Brodie is a complex character giving Lancet much to build on in future books. (Dec. 9/13)
Posted by Bill Selnes at 9:56 PM