In my review of Japantown by Barry Lancet the Soga was listed as the organization which killed a Japanese family to open the book. I did not provide any particulars on the group, not because I thought there would be spoilers of the mystery but because I did not want to provide spoilers in the context of too much information. This post will supply more information on Soga. If you prefer to limit your knowledge of a mystery it would be best to read no further on this post. (I hope this paragraph does not sound too pretentious. It is not so intended.)


The Soga is a secret organization whose members are highly skilled in covert operations. They are talented at observation and detection. Yet they are best known for their skill at assassination. Highly trained they can kill openly or create deaths that look accidental or self-inflicted.


Wearing sleek modern fabrics the black clad members of Soga are extremely dangerous in close combat. A favourite means of execution is a modern garrote of a special wire that slices through the neck as pressure is applied.


What is unique is that they come from a village in the mountains to the west of Tokyo. They have a bond that comes from the tight connections of living in a close knit community. Being recruited from the same community also makes sure their families can be intimidated if necessary.


Functioning in small cells they have remained invisible for generations.


It took me some time to realize the fighters of the Soga are the modern ninja of Japanese lore. 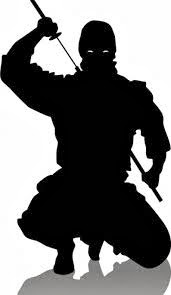 It was in reading Shogun by James Clavell that I first remember learning of ninjas. The black clothed ninjas were terrifying. They would seemingly appear out of nowhere to kill and then disappear again.


With their throwing stars tipped with poison and a readiness to die if needed to accomplish a mission they were rightly feared.


No one who has read Shogun will forget the lovely Mariko sacrificing herself during the ninja attack to show how shamefully Lord Ishido has acted.


With Soga Lancet has cleverly re-introduced a new type of ninjas without ever using the word.


The Soga are also a credible secret organization. With all our modern means of communication and investigation it is ever harder for the traditional secret society to exist. Lancet does well in setting out how the Soga managed to remain both secret and dangerous.
****
I also indicated in my last post that I would put forward my one regret with regard to Japantown. It is that the ending had too many twists at the end. Much as I enjoy Jeffery Deaver’s  series with Lincoln Rhyme I find he too often adds twists that are not needed and sometimes take away from the plot.
Posted by Bill Selnes at 11:19 PM