Cockroaches by Jo Nesbø and translated by Don Bartlett 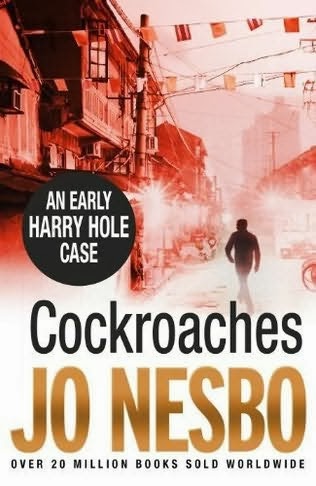 Cockroaches by Jo Nesbø and translated by Don Bartlett – The second Harry Hole books starts with Harry drunk every minute he is off duty. He has switched from Jim Beam whiskey to beer but daily drinks while off duty until drunk. He is managing to show up sober for work but is just going through the motions. His mind is deteriorating:


"Harry closed the door to his flat, shouted that he was home and nodded with satisfaction when there was no answer. Monsters came in all shapes and sizes, but so long as they weren’t waiting for him in the kitchen when he came home there was a chance he would have an undisturbed night’s sleep."


Abruptly he is he called into his Chief’s office as he is being sent again far out of Norway to deal with the death of a Norwegian citizen. In The Bat, my last post, he went to Sydney, Australia. In this book he goes to Bangkok, Thailand because the Norwegian Ambassador, Atle Molnes, has been found murdered in a hotel whose clientele are customers from the First World meeting prostitutes.


Harry has achieved celebrity for solving the Australian case and is a suitably high profile officer to be sent to Thailand. With his excessive drinking official expectations for a real investigation are low which accords with their desire for a quiet solution to the murder.


Harry leverages his position to get a promise to fully investigate his sister’s rape when he returns from Thailand.


The weather is just as hot as in Australia but in Thailand the humidity is exhausting for the Norwegian visitor.


Nesbø, as in The Bat, has a striking police inspector with whom Harry is to work. He describes Liz Crumley:


The head acquired a body, and Harry had to blink twice to assure himself that he wasn’t seeing things. Crumley was broad-shouldered and almost as tall as Harry; the hairless skull had pronounced jaw muscles and two intensely blue eyes about a thin, straight mouth. The uniform was a pale blue shirt, a large pair of Nike trainers and a skirt.


They get along well as Liz tolerates Harry’s idiosyncrasies.


Liz takes Harry to examine the body which has been left on the bed at the motel where the air conditioning has been running to keep the body tolerable. Harry determines the murder was unlikely related to prostitution and was well planned.


As he meets the dysfunctional Molnes family Harry realizes they must be carefully examined. The widow, Hilde, is even deeper in her gin bottle than Harry is into his beer bottles. Barely mourning she cares little about her husband’s death. Teenage daughter, Runa, is beautiful and bitter. She has a prosthesis over her withered right arm.


On delving into the Ambassador’s life Harry is drawn into contact with several expatriates from Norway. Each has his own connection with Molnes.


With the circumstances of his death, being found in a motel room for which a prostitute had an assignation contracted and was waiting a call at the office, and the setting of Bangkok there are sexual issues involved in the case.


I expect most readers will be like myself in assuming the issues involve sex with children. The story proves far more complex.


Just as in The Bat, Harry provokes some very bad men. In that part of his approach to investigation he reminds me of Spenser’s penchant for prodding.


I enjoyed the book but not as much as The Bat. The violence quotient was higher in this book and I found the ending unnecessarily twisted.


Harry is coping with his private demons but not addressing them whether he is drunk or sober.


I had read The Devil’s Star in 2006. I am now going back to see what I felt about Harry at that time and my next post will be about that book and my past and present thoughts on Harry. (Jan. 11/14)
Posted by Bill Selnes at 9:07 PM