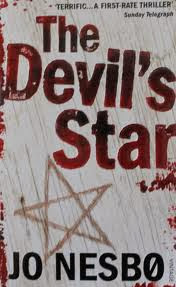 Back in 2006, long before I began blogging and when I was writing shorter reviews, I read and reviewed The Devil’s Star.


Having just read and reviewed the first two books in the series, The Bat and Cockroaches, I was curious to see what my thoughts of Nesbø were over 7 years ago. I held myself back from my looking up my review of The Devil’s Star until I had finished reading and reviewing TheBat and Cockroaches.


39. - 354.) The Devil’s Star by Jo Nesbø – Norwegian detective, Harry Hole, is a talented detective who does not fit the bureaucracy of the Oslo Police Department. He is also drinking himself into oblivion over the troubled investigation of the killing of his female colleague and nightmares from his childhood. He is also ruining a good relationship. In the midst of his personal deterioration a series of ritualistic murders (a five pointed star drawn in a continuous line is featured) challenge the department. Aspects of the killing pattern are clear but they struggle for a solution. Harry is partnered with rising detective, Tom Waaler. It is an unlikely combination as Harry suspects Waaler of corrupt and illegal acts. The investigation and relationships develop through a sweltering late summer. Harry, while deeply flawed, is an obsessive investigator. The solution is clever and credible. Excellent. Hardcover or paperback. (Sept. 18/06)


In 2006 I was as focused, as now, on Harry’s flaws and downward spiral in life.


I agree that in all of the books he is an “obsessive investigator”. I expect his tenacity entices us as readers.

In all 3 books Harry has a unique relationship with his police partner. All the partners are strong characters.


What is different is that, while I enjoyed The Bat and Cockroaches, I would not call the ending of either book clever. The Bat, though the solution was fine, did not really have a plausible ending.

After almost two weeks of reading and then reviewing Harry Hole it is time to move on from Norway. I have returned to Canada to read a pair of Canadian authors.
Posted by Bill Selnes at 10:58 PM