The Skin Collector by Jeffery Deaver 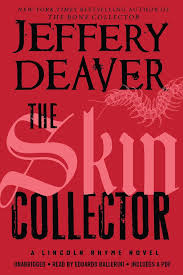 The Skin Collector by Jeffery Deaver – On a bitter November day with sleet pelting down in New York City a young sales clerk goes down to the basement of her boutique to search for some clothes needed in the store. A latex clad unsub grabs her, subdues her by injecting a sedative into her neck and drags her into a sub-basement of which few were aware existed in the building. He then pulls out a portable tattoo machine and tattooes her with the words “the second” in Old English script. Instead of ink he uses poison that kills her.


Lincoln Rhymes gets the call to investigate the scene. Amelia Sachs, wearing a headset cam, must worm her way down a tunnel to the murder scene in full protective gear. The journey challenges her claustrophobia (mine also).


At the scene, in a distracted moment, a handful of powder is released into her face. Fortunately the powder causes irritation rather than serious injury.


The unsub, Billy Haven, is a skilled skin artist not a mere tatttoist. He loves skin. In a scene that is fascinating, though creepy, he caresses the skin of the victim not for sexual gratification but because he loves skin. He calls skin God’s canvas.


The tattooists think of their work as mods (body modifications).


Mainstream tattooists are horrified that the unsub is using tattoos to poison people. They cannot fathom such a tattooist.


Worked into the story are stories from around the world of the history of tattoos. They had and have more far more significance than decoration.


Lincoln leads the search for the unsub, called the Underground Man. The unsub has a vast knowledge of underground Manhattan to rival Lincoln’s encyclopedic knowledge of his city. With more attacks paranoia sweeps New York as residents are reluctant to venture below ground.


Lincoln is startled when he realizes the unsub has studied Lincoln’s forensic methods and is challenging him. The unsub’s underground actions take Lincoln and the reader back to the first book in the series, The Bone Collector. While the unsub is not taking trophies he is obsessed with skin in a way comparable to the bone collector.


The unsub is a wickedly clever killer who leaves very little trace evidence at his attacks. He reacts swiftly and decisively when the police interrupt him.


The greatest puzzle is trying to determine why the unsub is killing random victims by poison. There does not appear to be any financial gain. No one is being extorted. No sexual motive is apparent.


At the same time Lincoln is intrigued that the Watchman has died from a heart attack in prison. He sends rookie, Ron Pulaski, undercover to the funeral home to see who picks up the ashes.


While the theme of the book recalls The Bone Collector the quick thinking and adaptable unsub reminded me of Malerick in The Vanished Man. Each is a master of misdirection.


The Skin Collector had me racing through the plot. Having read the whole series I knew Deaver would have twists in the story but, as usual, I did not detect them. I find it amazing how he leaves clues but I cannot put them together.


Lincoln’s quadriplegia has its smallest role in this book. Lincoln appears to have accepted his disability and no longer lets it dominate his days. His plans for suicide have drifted away. He is actually working on relationships with people other than Amelia.


I loved that the book includes diagrams. With modern technology it should be easier to insert illustrations in mysteries. I find they enhance the story and hope that, with a best selling author like Deaver using drawings, other current authors will put them in their books.


The Skin Collector is a fine book. Readers who have enjoyed earlier books in he series will equally like the book. (Sept. 6/14)
Posted by Bill Selnes at 2:10 PM