The Clue of the New Shoe by Arthur Upfield 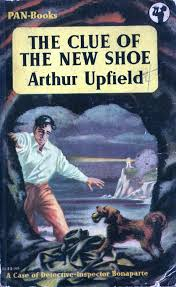 40. – 837.) The Clue of the New Shoe by Arthur Upfield (1952) - Napoleon “Bony” Bonaparte is in southern Australia in the area where the Great Ocean Road starts less than 80 km from Melbourne.
He has been sent to the district of Split Point where the body of a naked man was found in the lighthouse. The local and regional investigation was unable to even identify the victim.


Bony poses as the owner of a small sheep station of 100,000 acres in New South Wales far enough way to be difficult to check on his identity but close enough for a man seeking a holiday away from his wife.
Bony continues with his contrarian view that time is of great assistance in an unsolved murder investigation. He has a patience he attributes to the aboriginal side of his family.
Comfortably lodged in the Inlet Hotel he starts developing relationships with the local residents. Where current sleuths always in a hurry know little of the personalities and lives of those around a crime Bony learns life histories and the interplay of family and community relationships.

When the body is identified Bony can start gathering direct information from the locals during their daily drinking at the hotel bar. Bony shouts his share of beer. They are living in a time when little attention was paid to drinking and driving.

While glad to read another Bony story I found The Clue of the New Shoe a rather average story. It was more an ordinary undercover detective mystery.

Bony is always more observant than the average detective and does use his tracking skills in the book but the location and other characters did not show Bony at his best.

The residents of Split Point were unremarkable except for Old Penwarden, an 80 plus coffin maker, whose love of his craft is striking.

The book took place in a rural setting but it was a well settled community with only white residents. There were no connections to aboriginal people.

I realize that I like Bony best when he is detecting in the remote wild country of Australia.

The book was located in a real life spot in Australia that Sharon, Jonathan and I visited 5 years ago. My next post will be about the Split Point Lighthouse.

Upfield was actually living at Airey's Inlet where the lighthouse is located when he wrote The Clue of the New Shoe which was originally published as The New Shoe.

In a biography the local general store, which mainly sold paperbacks, sold 24 hardcover copies of The New Shoe immediately after publication but could not obtain more copies from the national distributor as they were out of stock. There were dark thoughts that because Upfield was an Australian writer his books did not get priority with English centered publishers.