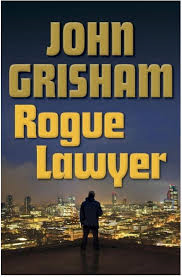 In my previous post I discussed Sebastian Rudd, the star (I use the word deliberately) lawyer of The Rogue Lawyer by John Grisham. This post will actually discuss some of the cases in the book.


In the book’s opening case Rudd is defending a young man charged with murdering a pair of young girls in a small town some distance from his home city. Rudd is furious. The police have manufactured evidence, the prosecutor is exaggerating the evidence and the judge is not restraining the legal assault upon his 18 year old client.


While not material to the defence Rudd is convinced his client is actually innocent. He is being railroaded to appease a frightened and vengeful community.


A series of alibi witnesses are credible in their evidence but ignored because of their lifestyles on the fringe of society. Thwarted at every turn Rudd desperately knows he must solve the murders to save his client.


Fortunately, there is a realistic alternative. Defence counsel dream of having a believable option other than the accused. Grisham, in Rogue Lawyer, goes further than a different plausible suspect. Rudd finds the evidence that proves his client did not commit the crime.


In defending such a pariah it is probable that Rudd had to actually solve the crime to save the client. I thought of the real life Saskatchewan case of David Milgaard convicting of murdering a nurse while he was still a teenager. While evidence piled up that cast doubt about the verdict it was not until DNA evidence identified the actual killer that Milgaard was released. He spent 22 years in jail.


The only difference between Grisham’s fictional character and Milgaard is that Grisham’s accused would have been dead long before 22 years as he was facing the death penalty in the trial.


Unlike most legal mysteries Grisham goes through several cases with Rudd during the course of the book. Dealing with multiple files is what real life lawyers experience. No lawyer I know handles a case at a time as in most legal mysteries. While a lawyer may concentrate on a case the lawyer is constantly dealing with dozens of other files.


Few books talk about cash flow and overhead. In Rogue Lawyer there is a constant discussion of money as there is in real life legal practice. Rudd is daily making sure he has enough money coming in to meet his obligations. It was somewhat unreal how much money he is willing to put into defending people who have no ability to even pay expenses. Large firms may do expensive pro bono defences but for a solo practitioner it would be reckless to spend the amounts Rudd does on defending those who cannot afford him.


Grisham, as with Michael Connelly, has a gift for hooking the reader. The second story is titled the Boom Boom Room. Rudd explains the name:


I follow two guards dressed in full military gear through a maze and come to the Boom Boom Room. It is nothing more than a large holding cell where the condemned is placed precisely five hours before his big moment. There, he waits with his lawyer, spiritual adviser and maybe some family. Full contact is allowed, and there can be some pretty sad moments when Momma arrives for the final hug. The last meal is served precisely two hours before the final walk, and after that only the lawyer can hang around.


In a riveting story he is with his mobster client, Link Scanlon, in the Boom Boom Room on the evening Link is about to be executed. In an incredibly compelling saga bombs start going off around the state as the moment for execution nears. I raced through the chapter as fast as I could read, even faster.


Some of the cases are more exaggerated than customary in a Grisham book but they are fascinating. As well, some of the cases such as the first in the book discussed above, have a real life equivalent.


Rudd is not a saint. He is unethical at times which troubled me. What is left of a legal system if all involved are unethical.


Grisham turned his imagination loose with Sebastian Rudd. There are moral issues addressed in the book but the drama of the narrative will only let you reflect upon the injustices of the American criminal justice system after you have finished the book. I recommend you read the book before it appears on the big screen. It is No. 1 on the New York Times bestseller list  and I expect will be there for many weeks in 2016.