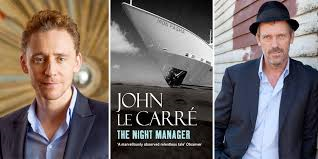 Last night Sharon and I had a chance to watch the first episode of the current adaptation of The Night Manager by John le Carré being broadcast on the BBC. Ordinarily if I was going to write about a mini-series I would wait until it was complete but I decided to write about the opening episode to close out my two weeks of posts involving John Le Carré.


I was impressed by the first episode. It caught and held my attention.


From the moment Tom Hiddleston appeared on the screen he met my mental image of Jonathan Pine from the book. Hiddleston is tall enough, weathered enough, lean enough, handsome enough.


I thought it very clever to move the opening scenes in Cairo from the early 1990’s to the 2011 Arab Spring Revolution and the protests wracking Cairo. Indeed, it gave a clearer reason for Dickie Roper to be selling arms in Egypt. They could be used against the protesters.


I thought Aure Atika was convincingly sultry for Freddie Hamid’s older mistress, Sophie Alekan. Her secrets betrayed by Pine she forgave him but he could not forgive himself.


As in the book word of the proposed arms deal was leaked in London to Roper by one of the traditional British Intelligence agencies.


In the book the small new intelligence agency seeking to take down Roper was headed by Leonard Burr. In the series it is run by a woman, Angela Burr, played by Oliva Colman. It was interesting to see the shift in leadership a generation after the book was written. I saw no problems with the change in gender. In characterization I thought Colman looked properly rumpled. The Burr of the book is hardly a fashionable man.


The T.V. confrontation between Pine and Sebastian Ogilvy in which Ogilvy denigrates Sophie and dismisses any obligation of the British government towards her was more effective than the book as we saw the emotions playing out in Pine.


As the story moves to Switzerland setting the luxury hotel in Zermatt rather than Zurich was immaterial to me. In both locations the rich are carefully pampered.


Hugh Laurie as Richard “Dickie” Onslow Roper appropriately swept into the hotel with his entourage. He did not precisely fit my mental view of Roper. From the book I had envisaged Roper as a bigger, more robust man, with a booming voice.


I did take me a few minutes to move away from remembering Laurie as Dr. House. Thankfully in the role of Roper he does not use a cane.


In watching the episode I did accept Laurie as Roper. Laurie is clearly in command. He has the touch of world weariness I remember from the book. He does well at playing Roper’s role as a philanthropist while dealing in arms. He is equally of the right age.


The age difference between Roper and his girlfriend, Jeds Marshall, hits more strongly when you see them side by side rather than reading about them.


Elizabeth Debicki as Jeds is suitably lanky, lovely and languid. For some reason I imagined her as a brunette with hair flowing down her back. Jed’s short blonde hairdo works well on Debicki. At 6’ 2 1/4” she has the height I expected from the book.


What is most impressive about the casting is that the “bad” guys are average to good looking rather than bad by appearance alone.


I thought the script well written. The characters have distinct voices and speak intelligently. I was not surprised that le Carré was involved with David Farr in the writing of the series.


You can see developing through the first episode Pine’s commitment to doing right and his desire to stop Roper, called the “worst man in the world”, by Sophie. He will be an easy recruitment by British Intelligence in the next episode.


Most interesting to me was that le Carré’s sons, Simon and Stephen Cornwell are executive producers of the production.


My Australian blogging friend, Bernadette at her fine blog Reactions to Reading, occasionally compares a book with its adaption on screen. It is not always clear which is the better.