The Winners’ Circle by Gail Bowen 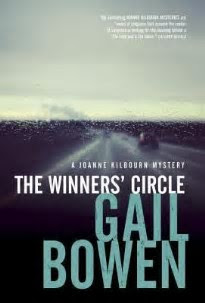 (30. – 917.) The Winners’ Circle by Gail Bowen – Since Zack Shreeve came into Joanne Kilbourn’s life the Winner’s Circle has played a role in the series. The Winner’s Circle, a self-proclaimed group of law students, was formed by Zack and four other law students (Isobel, Chris, Kevin and Blake) in their first year of law school at the University of Saskatchewan. Blessed with brains and charisma they later founded a law firm that became prominent and successful in Regina. Almost 30 years have passed since they finished law school.

Legal prominence and financial prosperity has not shielded the Winner’s Circle from tragedy. Earlier books in the series chronicle the deaths of Chris and Blake’s wife, Lily. Though those deaths are years in the past they have left the survivors and their families heavily burdened.

Three teenage daughters of the legal partners - Taylor, Isobel and Gracie - call upon their parents and spouses to commit to exploring together their enduring griefs a few weeks later on October 31 in the way of the Mexican tradition of the Day of the Dead (Dia de los Muertos). Having learned that day “celebrates the lives of the dead by the living reminiscing and sharing some of the things that have brought their loved ones joy when they were alive” one of the girls, Isobel, says:

“That’s when we knew that the Day of the Dead offered something our families needed. We’ve all lost people we loved or people we wish we’d had the chance to love. Gracie and Taylor’s mothers both died. The sister who I never knew existed until three years ago died before I had the chance to meet her.”

She continues by talking to her Zack of what has been lost because of their family sorrows:

“Every night we fell asleep to the sounds of the adults\\
laughing,” ….

The adults agree to the request.

A few days later Gracie, whose mother Lily was a member of the Lakota First Nation at the Standing Buffalo Reserve near Lawyers’ Bay, talks to Joanne about her Aunt Rose from the Reserve who has reservations about them drawing on a different culture which they do not fully understand. Having grown up in “white culture and Dakota ways” Gracie has an appreciation of traditions and their power.

I can think of few other series where teenagers are given a meaningful role.

At the same time Falconer Shreeve, with Zack focused on being mayor of Regina and doubtful to return to the law firm, has major decisions to make about leadership and transition. The Winners’ Circle has maintained tight control of the firm. If the firm is to survive it must adjust to accommodate the young partners who have been kept from an equity position within the firm. Change for the founders is no easier for a close knit law firm than for any other business. It will not be seamless. There is bound to be relief that the firm is progressing but pain is inevitable.

The themes of exploring the past through personal lives and moving into the future for the law firm intersect at a gala banquet in Zack’s honour to raise money for the foundation created in honour of Chris. The foundation is “dedicated to funding initiatives that help young people overcome obstacles in their lives.”

At that banquet Regina Police Chief, Debbie Haczkewicz, speaks about how Zack, who has been in a wheelchair for decades, convinced her son, left paraplegic in an accident and wanting to die, that life is worthy living. She provides a creative image “that, like the orca and the great white shark, police officers and trial lawyers are natural enemies.” After recounting how Zack helped her son “overcome” she concludes:

However, the banquet ends in discord as law firm issues intrude upon them.

Drawn deeply into the compelling story I was shaken, which no longer happens often after reading a couple of thousand mysteries, by an act of violence that is shattering in its impact. The capable and efficient Joanne is left reeling.


Gail’s 17th book in the Joanne Kilbourn series is among the best. It takes a truly gifted writer to write so well so long into a series.