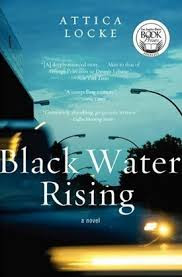 (37. – 924.) Black Water Rising by Attica Locke – It is 1981 in Houston and Jay Porter, a young black lawyer struggling to survive in private practice, wants to celebrate the birthday of his very pregnant wife, Bernie. With little money coming in he barters for a “moonlight cruise”. There is a boat and water and night but it is far from a romantic evening. As they make their way along the turgid Buffalo Bayou they hear a woman screaming and then a gunshot. They see a body roll into the river. Jay dives into the murky water and rescues her. The young white woman refuses to say what happened. Jay does not provide particulars on himself and Bernie.

When Jay and Bernie drop the woman outside a police station. Jay decides to do no more:

Just the idea of being anywhere near a police station at this time of night, looking like a ragged dog, tangled up in some white woman’s mess makes him more than a little dizzy. He knows firsthand the long, creative arm of Southern law enforcement, knows when he ought to keep his mouth shut.

His fear, even as a lawyer, spoke clearly to me of the position of black Americans dealing with police.

The next day Jay manages to stave off a summary dismissal of a civil action by his client, Dana Moreland, against City Commissioner, J.T. Cumings. Ms. Moreland, a hooker, alleges she was injured while riding with Mr. Cumings when he hit a telephone pole. At the time of the accident she was in a vulnerable position.

Bernie's father, the Reverend Boykin, calls upon Jay to attend a meeting of the black Brotherhood of Longshoremen. They are at odds with the white International Longshoremen's Association. While under court order to integrate the process is not going well.

The black longshoremen unwilling to put up with their continuing subservient position on the docks are looking to strike.

Led by Reverend Boykin they want Jay to talk to the white mayor, Cynthia Maddox, about providing police protection if they go on strike.

They know Jay and Cynthia had a personal relationship while in university over a decade earlier.

While the mayor is now a member of the establishment she was a student radical at university going so far as to join the SDS (Students for a Democratic Society).

Jay was also a student activist though more focused on black issues. During his university years he was associated with some of the leading young black activists including Stokely Carmichael.

Because of his promise to his father in law Jay talks with Cynthia. It is a difficult conversation.

Jay soon finds out a middle aged white man was found shot to death in a car in the vicinity of where he saved the woman. Unable to leave the issue alone and worried what will happen to him and Bernie if the police find out he did not report what he knew Jay investigates the murder.

Jay, coming from a tough background, has a hard time with relationships. He loves Bernie but holds so much within himself. He is so guarded.

With an unresolved past and a complex present Jay treads a challenging path.

Black Water Rising is a strong first novel. It gave me more insight into the lives of black Americans (I use the description of the book) at the beginning of the 1980's in the southern United States.

In my next post I will discuss the impact of reading Black Water Rising after reading the second book in the series, Pleasantville.