The Work of Justice – The Trials of Robert Raymond Cook by J. Pecover 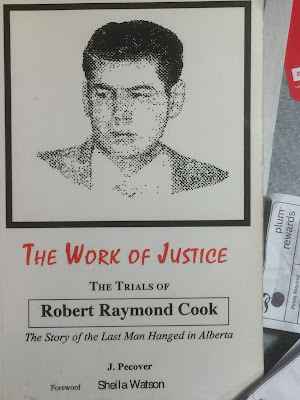 At the heart of the book was a horrific crime. Cook’s father, stepmother and 5 half siblings were murdered in their home in Stettler and dumped into a grease pit in the garage attached to the house.

To try to understand Cook Pecover delves into his personal and criminal history. Growing up in the small towns of Hanna and Stettler in Alberta Cook started stealing cars when he was 12. I was startled. Growing up on a farm in Saskatchewan a generation later I cannot recall knowing or hearing about anyone in my area becoming a thief before becoming a teenager.

It was not clear why Cook chose the criminal life. His primary life skill was hot wiring cars but he could have been a mechanic like his Dad. He was undoubtedly affected by family circumstances. His natural mother died when he was 9 and his father remarried about 3 years later and moved to Stettler. Almost immediately Cook began stealing cars.

Two days after his final release in June of 1959 he arrived in Stettler on a Thursday. That evening he met with his father. They went home together.

That night, probably around midnight, the family was slaughtered.

The next morning Cook is in Edmonton, over a 150 km away, trading off the year old family station wagon on an Impala, a flashy “brand-new white convertible, top down, red Naugahyde upholstery”. He uses his father’s driver’s licence to make the deal.

Cook spent Friday and much of Saturday cruising around rural Alberta with a trio of teenagers. Eventually he returns to Stettler on Saturday and spends about an hour at the family home. He is detained on Saturday evening by the police with regard to questions concerning the new car.

After the bodies are found on Sunday he is charged with murder.

Cook provides an explanation to the RCMP that he repeats at his trials. He says that while speaking with his father on Thursday evening they agreed that they would buy a garage in British Columbia and go into business together. He said his father, stepmother and 5 half-siblings would go to British Columbia on Friday to look for a business and call him early in the week at the house to tell him where to meet them. He continued that his father gave him his identification and the station wagon so he could get a new car.

He asserts he gave his father $4,100.00 from past break and enters that he had dug up after release. The funds were to help pay for the new garage. His father, Ray, was a petty thief but the defence led no evidence of that criminality to support Cook’s evidence his father wwas quite willing to accept stolen money from his son on the day of the murders. Such a sum was neither found at the house nor on Cook.

While his father had discussed with Cook getting a garage together and had looked around Alberta there were no plans to go looking in British Columbia at the time of Cook’s release. There was no indication on Thursday that father would not be at work on Friday and the siblings would not be in school.

The problems with Cook’s explanation are obvious. It defies credibility.

Cook states it must have been a stranger who entered the house after he left Thursday evening and killed his family and then put on Cook’s suit to move the bodies and try to clean up the house.

Cook breaks down crying uncontrollably when told by the RCMP his father is dead.

In giving his statements he is calm and direct in his answers to the RCMP. In trying to explain he tangles himself deeper. It was a surprise to me that as a career criminal he would think he could “explain” away a charge of murder. There was no chance of success. Defence counsel advise accused not to make statements as they cannot help the defence. As here too often the accused is caught in contradictions. Cook ultimately was forced to admit that he lied in parts of this statements.

Cook went through life lying to the police but he took pride that when “the game was up” he had never lied in court that he was not guilty. It is too subtle “a game” for a jury to appreciate he was telling the truth in court about not committing murder because, in the past, he had only lied to the police and not in court.