21 Days in Normandy by Angelo Caravaggio 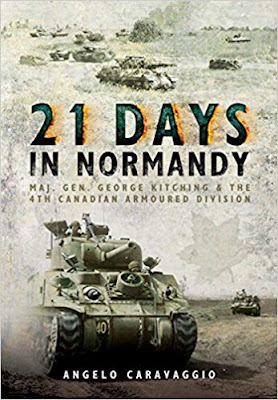 Canada did close the gap but it took longer than most historians felt needed which allowed tens of thousands of German soldiers to escape.

In the battles to close the gap the tip of the Canadian army was the 4th Canadian Armoured Division (4 Cdn Arm Div). Their leader, Major General George Kitching, was relieved of his command as the battle ended. Caravaggio argues he should not have been removed.

In 21 Days in Normandy there is a detailed exploration of the structure and makeup of the Canadian army. That section is slow going and could have been significantly reduced with much of the information consigned to footnotes or appendices for those readers wanting such detail. (There were already detailed and extensive footnotes and appendices.)

It was useful to have background information especially about the woeful state of the Canadian army in 1939. Canada was ill-prepared for armoured warfare. When WW II commenced Canada had a mere “sixteen outdated British Light Mk VI tanks and twelve Carden-Lloyd carriers”.

Unlike most books on battles there is extensive discussion on how army bureaucracy can help or hinder the troops fighting the battles.

The Canadian army of WW II had an enormous number of reports and orders flowing up and down from division HQ. With regard to the functioning of the division in Normandy:

Breakdowns in situational awareness, common intent and battle procedure would plague the 4 CDN Armd Div in its first major battle.

Kitching trained and served in the British Army before coming to Canada in 1938. He joined the Canadian Army in 1939 as a 2nd lieutenant. By February of 1944 he was a Major General in commanding the 4th Canadian Armoured Division. It was a series of promotions not uncommon in the rapidly expanding Canadian army of WW II. It was not considered necessary that the commander of an armoured division have experience in an armoured division. Kitching was an infantry officer.

Simonds worked well with Kitching in Sicily and Italy and wanted Kitchings to be with him in northern Europe. Each highly respected the other.

It was a surprise that the division had no actual division scale exercises prior to being deployed to France.

They arrived in France well after the invasion on June 6.

They prepared for battle and moved into position in early August to lead the attack to close the gap.

(My next post will contain the rest of my review.)