Another Spy in Paris by Robert J. Young 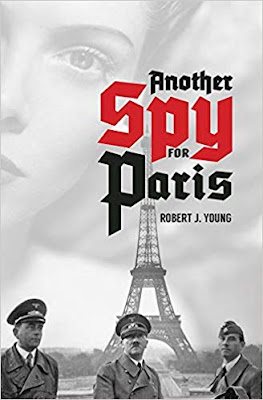 (16. – 988.) Another Spy in Paris by Robert J. Young - Lieutenant Maurice Auriol fights hard against the German invaders of France in 1940. Twice his unit is destroyed. After the second battle he is captured.


In 1974 Andrew Stanhope has been diligently going through French Army archives at the decaying fortress of Vincennes for three years. He is exploring the records from the 1930’s. It is a period French officialdom would prefer remain in obscurity as it is convenient to blame the military and civilian leaders of that decade for the disaster of 1940. No one wants to acknowledge the skill of the German invaders or possible treachery within the French military.


A Canadian professor, Stanhope, is one of few foreign academics allowed to research the Army archives. He has gone through boxes and boxes of often meaningless documents establishing himself as a thorough researcher. Now he seeks the more delicate records of French Military Intelligence in 1940.


Colonel Stehlin has appreciated the Canadian academic’s writing about France and is “uncomfortable with the too-simple, uncluttered, official indictments of France’s pre-war regimes”. He grants Stanhope’s application.


His opening box contains routine and incomplete documents. Across from him is a conscript reviewing military medical records from the same era. Invited to take a look at the medical records while the conscript goes for lunch Stanhope unexpectedly finds a pair of ripped postcards speaking of betrayal in 1940.


We learn of the particulars of the German espionage and some of the participants. Stanhope searches for the information that will reveal the spies 34 years later. (I thought of the French spying within the German embassy in the Dreyfus scandal a generation earlier in France.)


What is unique is that the espionage involves a French high fashion house. Haute fashion and its creators move freely across borders. High ranking government officials are clients.


The search is not filled with bodies. Tension builds from the gradual accumulation of information. Some is fortuitous, much is from careful examination and thoughtful consideration.


Another Spy For Paris is a slender book. It is a good book with no pretensions. Young is Saskatchewan born and currently an Emeritus Professor of History at the University of Winnipeg, Among his books are biographies of French figures. Young clearly has an intimate knowledge of Paris. He easily discusses its history, landmarks, establishments and people. It is well written and I was glad I read it.