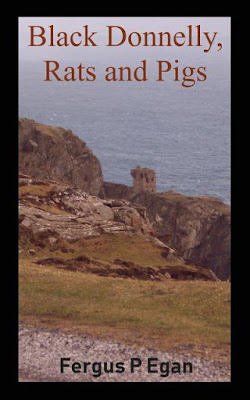 
In the summer of 1947 Murtagh (Murty) Muldoon is visiting his Uncle Ben Muldoon. Murty is looking forward to working on the farm and learning about “the Troubles” (The conflict between England and Ireland in the early 1920’s leading to the partition of the island and the establishment of the current Ireland.)


The dialogue is local with the occasional Irish word or Irish English (both always translated) but not overdone.


On a trip to town, in their horse drawn cart, to sell 10 piglets Murty and Ben pass by the spooky residence of Black Donnelly. While famed for his sausage he is a recluse living in a house full of clocks.


On their way home at twilight Murty is shaken by a huge black dog that he subsequently identifies as a pig trying to climb into the back of the cart. Failing to get into the cart the beast runs through the doorway of Black Donnelly’s home.


The next day Black Donnelly is found dead in his slaughterhouse. He has been killed and his heart slashed from his body.


There is a powerful tradition of the danger of a Black Pig, “in local folklore, a phantom harbinger of death”.  The book is not supernatural.


The murder investigation is led by Detective Inspector John Patrick “Murf”. Murphy as eccentric and brilliant a detective as can be found in Ireland.


Murf is a great believer in seeing the big picture to solve investigations. He thinks about white dots and black dots combining to provide that big picture.


Motives for murder go back 30 years to the final battles in WW I involving Irish
soldiers fighting for England. Captain Daniel Edward Kennedy is brave but reckless leading to a confrontation with Terence “Tracy” Prior, a sapper. Prior is deeply respected by his fellow soldiers as he goes into No Man’s Land at night to plant bombs. Joining him is a German mastiff, Rex, that he saved during one foray.


After the war the civil conflict in Ireland involves every citizen. In this region during “the Troubles” many have connections with or membership in the IRA, including ranking police officers, . Yet there are internal conflicts in every group. There are pro and anti-Treaty IRA.


There are vivid stories of the battles between the IRA and the Black and Tans and the police. Flying columns of elite fighters move all around Ireland.


In the end Murf puts the big picture together connecting the white and black dots. He is brilliant at assembling and assessing evidence.


It is an average book. Murf is a great character. I would read more of him. I am sure a future book would have a more inviting title and cover.