A Better Man by Louise Penny 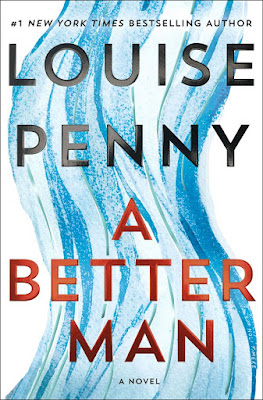 A Better Man by Louise Penny - Armand Gamache is no longer Chief Superintendent. His gamble in Kingdom of the Blind to allow drugs into Quebec to be able to take down the organization behind the drug trafficking was successful but the risks taken and the shootout that followed had personal consequences. The politicians in Quebec City have demoted him to Chief Inspector of Homicide expecting him to resign rather than accept the humiliation of loss of status and position. As well he would be thrust upon his son-in-law, Jean-Guy Beauvoir, the current Chief, who will soon be leaving his position for a new job in Paris. Gamache confounds everyone by gracefully accepting.

At the first meeting of the Homicide team Detective Lysette Cloutier advises a young woman is missing. Vivienne Godin has not arrived at her father’s place. Her husband, Carl Tracey, has been abusive. The father, Homer, is a friend of Cloutier. Detective Cloutier is an investigative genius with numbers and a Closseau with physical police work. Holding her ground before an angry Chief Inspector Beauvoir at a Homicide Department meeting she challenges him:

“How would you feel, sir? If your child didn’t come home?”

Beauvoir assigns Gamache and Cloutier to investigate. It is a return for Gamache to his police roots. He had loved being an investigator and was glad to be back in the field.

I was excited by the prospect of Gamache once again using his formidable police skills in an investigation. I have found distracting over several books in the series the turmoil and intrigue within the Surete. Sometimes implausible, there were too many conspiracies for me.

Cloutier and Gamache drive out to the Eastern Townships to investigate Godin’s disappearance. Local Surete officer, Bob Cameron, joins them. Cameron, a former Canadian professional football offensive lineman, is a big powerful man who has threatened Tracey to Gamache’s dismay.

There is no miracle for Vivienne:

Vivienne’s father sank, slowly, slowly to his knees. The slowly, slowly folded over. His head in the muck. His hands clutching the ground. The big man curled himself around his heart.

In Three Pines a 100 year flood, the second in Ruth’s lifetime, threatens the village. The flooding has enveloped much of Quebec. In the crisis the tensions within the Surete affect decision making.

Vivienne’s death occurs close enough to Three Pines that the Surete set up their incident room in the old firehall. It is a return to the early books in the series when the police and villagers got to know each other through the investigations based in the firehall. It is an obvious irony that the roles of Beauvoir and Gamache are reversed.

Tracey contradicts the stereotype of an increasingly abusive husband as he is an artist - a man who makes a modest living as a potter.


Intertwined in the story is Clara’s struggling career. Internet trolls are savaging her work. Never the most sanguine personality she is doubting herself. Is her work over-rated? It is the most interesting story line. I wish it had been the focus of the book.

Gamache’s compassion is unnerving to the rigidly moralistic. I was reminded of Jesus and his confrontations with the Pharisees in the Bible.

As I read I wondered if Penny would inexorably lead readers to a conventional solution for the murder of an abused wife.

The investigation plods a bit. What was missing was tension in the investigation and between the parties. There were stressful moments but it took over 200 pages into the book for me to feel anxious. At that point the plot accelerated and there was abundant tension.

Unfortunately part of the tension was my frustration over Penny’s disregard for the criminal law of Canada. The actions of the officers and the courtroom scenes were completely fictional and even driven by American terminology. I expect many will find the descriptions of the court process interesting, even compelling. I found them unbelievable. Penny expresses appreciation to a couple of lawyers in her acknowledgements for help with ideas. I do not know if she realizes the actions and judgment in her judicial proceedings have little connection with Canadian criminal law and procedure.

In Penny’s last 3 books legal issues have played major roles in each plot. In writing about the previous two books, Glass Mirrors and Kingdom of the Blind I had supplemental posts about the errors in law. I will not write a third additional post going into the errors of A Better Man. Penny does not get law and legal process correct. I find obvious errors bothersome and wonder why they are there. I am convinced Penny could get as much drama by getting it right rather than wrong. I expect it would take longer to write as greater consultation with lawyers would be needed. I believe she does not take such artistic licence when writing about the lives of artists, their creative processes and the works produced.

Yet, as always with a Penny book, there is a powerful examination of emotions and relationships and the consequences of being broken. An analysis of the phrase truth with malice is a recurring theme in the book. It is a cruelty with which all readers can identify.

And there are little touches of brilliance. She describes the departure of Honore, the young grandson of Armand and Reine-Marie, to Paris:

The young family disappeared through the dooer, Honore, holding up his hand to wave goodbye.

It was the secret wave he and his grandfather had worked out after Great-aunt Ruth had shown the boy the one-finger wave. Papa had explained that really, three fingers were even better. For the three pines.

Those lovely moments to her stories together with her insignts into the human psyche will keep me reading the series no matter how much she frustrates me on legal matters.