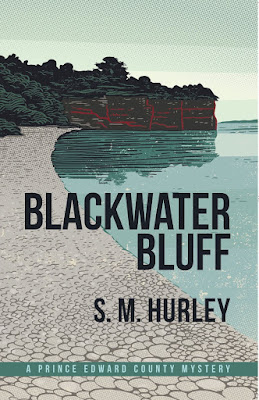 Blackwater Bluff by S.M. Hurley - Crown prosecutor, Augusta “Augie” de Graaf, has Nancy Birch, the mother of accused Darryl Birch, floundering over when Nancy watched a newscast. Nancy is giving evidence in support of an alibi defence by her son. Darryl explodes, thrusting his counsel aside, and attacks Augie. Police and court security descend on Darryl. Leading the police is Detective Geoff Cunningham. That is a scene I can visualize in every detail. (My next post will be about the location of the accused in trials.)

While in hospital because of a badly injured ankle her prim and precise supervisor, David Collins, comes to her to personally deliver the news that her mentor and inspiration in the legal profession, Ruth Neill, has been found dead. Neill was discovered in her car in the deep waters below Blackwater Bluff in Prince Edward County, Ontario.

Augie wants to lead the Crown brief but Collins puts her on leave and calls in an outside Crown, Theo Besonday, to handle the case and her other pending cases.

Over the objections of her orthopedic surgeon Augie has her leg put in a cast and she leaves hospital.

Defence counsel, Caleb “Remy” Remington, has picked up a new client, 19 year old Benjamin Miner, who has been overcharged by a zealous police officer for taking a 15 year old girl, Emily Johnson, unwillingly out to Blackwater Bluffs. When he appeared disorientated after being in the bush she drove them back to town. Remy skillfully presents arguments for Miner’s release on bail.

In a deftly written paragraph the Justice hearing the bail application gives his decision:

“The Crown’s position continues to be that the only appropriate decision is that Mr. Miner be detained in custody.

“Then I’m going to make an inappropriate decision, Ms. Paddon, and I want some input from you as to conditions.”

Meanwhile, the unhappy patient, Augie, is stuck at the family dairy farm. She will not stay there resting.

She is convinced Ruth was murdered and ensure the murderer is caught.

She shares sorrow with Ruth’s partner, Joe O’Rorke. Augie and Joe are close enough to wait until words are right:

Joseph sat beside her again, and they were quiet, sipping, looking
out over the lawn between the house and the river. A pileated woodpecker swooped to a nearby oak leaning over the water. The tree was too healthy to offer the big bird a meal of carpenter ants, and after a few exploratory digs it moved on.

I was reminded of the descriptive skills of Louise Penny in the Armand Gamache series.

Joe is an expert in lichens. Joe and Ruth had been about to go on their annual two week trip involving lichen research when she was murdered.

A widow for several years Augie has a 9 year old son, Marc, who brightens her life. He is despondent when Augie says she cannot take him for cottage week and overjoyed when she suggests he spend the week at the cottage with Granpy (his paternal grandfather).

There are complications with Ruth’s office when her will discloses a holograph (handwritten) codicil changing the executor responsible for her law office files from the senior partner to Augie. That change set me reflecting on holograph changes to wills and succession plans for the unexpected deaths of practising lawyers.

Augie has the obsession for details of an experienced trial lawyer. Cases can unravel because of unconsidered details. I continually tell clients to let me decide what is important, just tell me what happened.

Both police and Augie struggle to find evidence on why Ruth was killed.

Augie’s stress level is further elevated by Collins using the attack in court and her injury to justify suspension over his frustration from her lengthy history of  insubordination through ignoring his directives.

Augie, as evidence points toward Joe, is “defence counsel” skeptic of that evidence. While she attempts to be “Crown Counsel” rigorous she is more the defence counsel. It is ironic and subtle in the telling.

And then another person is charged with the murder. Augie is no more comfortable with this alleged killer.

Hurley precisely lays out the exact advice I have given accused about to be questioned. Say nothing. It is standard advice too often ignored by clients. Many do not know that police can ask questions in Canada after an accused has consulted a lawyer. It is up to the accused to assert their right to silence.

I loved that the solution involved legal skills and a legal motive. A lawyer as sleuth should solve the crime with legal talent.

I have discovered Canada’s next writer of quality legal mystery fiction.