Dressing to Impress in There's a Murder Afoot 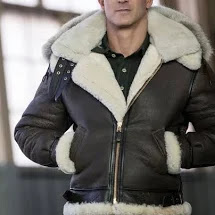 Clothes have been featured in all the Gemma Doyle mysteries by Vicki Delany.

A few years ago, after reading By Book or By Crook by Vicki, writing under the name of Eva Gates in her Lighthouse Library series, I wrote a post about the vivid descriptions of women’s clothes and the minimal detail concerning male apparel.

I was glad, whether because of  a conscious change by the author or the simply plot requiring more description of what the men were wearing there are more particulars of men in clothes in There’s a Murder Afoot.

During her investigation Gemma advises her friend, Grant, to dress “rich” to impress at an art gallery for the rich, not the super-rich. They sell paintings “in the style of the old masters”.  He does his best:

…. and today he looked the part of a well-off art collector in a brown sheepskin bomber jacket with checked white-and-brown scarf over a good gray woolen sweater and dark jeans rolled up at the cuffs. Sturdy brown leather boots were on his feet.

As his “meek little wife” Gemma decides upon:

…. slumming it in jeans and a navy-blue blazer. I’d need some high-end accessories though, if I wanted to look the part.

While Grant thinks she looks fine Gemma thinks “What do men know?”. On clothing women feel free to be sexist. A quick stop at Harrod’s completes her ensemble:

There are consequences to fashion statements:

I couldn’t have been walking in my new boots more than ten minutes, and my feet were screaming in pain. I don’t normally wear such high heels, and I was worried I’d topple over.

The owner of Gallery Lambert does dress rich:

Mr. Julian Lambert was a short, slightly built man in an Armani suit, gold cufflinks, and Italian loafers. His hair was expertly cut, his hands manicured, and he smelled of cologne. His accent was English and middle-class.

Believing Mr. Lambert has access to illicit paintings, even forgeries, Gemma wants him to think of Grant as a collector not averse to paintings not for public sale. Their pretences are convincing and Julian is willing to see what might be available in the dimmer corners of the art world.

I hope more authors will choose to dress their male characters with style.