The Princeling of Nanjing by Ian Hamilton 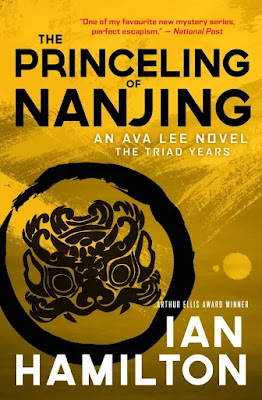 The Princeling of Nanjing by Ian Hamilton - Ava Lee is deeply occupied with the opportunities and dangers of Chinese business. Her business venture into high end clothing with May Ling and Amanda Lee has a very successful fashion show. They are poised to enter into markets in and out of China. However, Xu who is the chairman of the triads, has experienced complications in his personal business.


Xu seeks Ava’s business and accounting experience to deal with the Tsai family who count among its members the Governor and the Communist Party Secretary for the province of Jiangsu. They have leveraged their control of the provincial government into lucrative contracts. As common with the avaricious they want more and are pushing, even threatening, Xu to enter into the manufacture of synthetic drugs. For a man wanting to minimize his triad business and to avoid conflict within the triads it is a difficult situation.


Ava returns to her roots as a forensic accountant. Discreetly but extensively using contacts within China, Hong Kong and her home of Toronto she assembles a picture of a business empire assembled by the Tsais. Their corruption is breathtaking in its scale.


The Tsais, especially the Tasi men, are also clever and intuitive. They swiftly discern Ava’s interest which they rightly assume was on behalf of Xu and react negatively.


Ava, upset with herself for underestimating the Tsais, reverts to her basic approach to aggression. She takes the initiative, moving swifter than her opposition, to counter-attack and force the Tsai family on the defensive.


One of her strategies is logical. The other is implausible. Only in fiction do people give up information so quickly under some pressure.


Unlike several recent books in the series there is no violent resolution. Ava skillfully orchestrates an exploration of the Tsai family finances.


While I weary of books with almost endless twists the tension of the investigation was modest. The results were foreordained.


The sums involved in the books of the series have increased exponentially from the earliest books. Ava is now a member of the super-rich though her personal expenditures are little changed. She is on her way to being a business titan.


The story moves swiftly. While I appreciate Ava using her accounting skills more than her martial arts some more drama was needed.


Ava’s personal relationships are barely touched upon in the book.