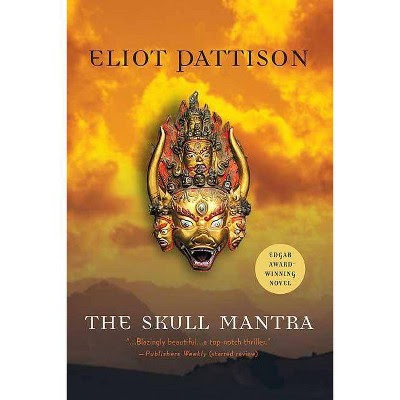 (19. - 1044.) The Skull Mantra by Eliot Pattison (1999) - Comrade Shan has been placed in a work brigade in the mountains of Tibet. They are in a Chinese gulag. His fellow prisoners in the 404th brigade are mainly Bhuddist priests. They are building roads to accommodate the colonists who are coming to occupy the land. Thousands and thousands of Chinese settlers will gradually dominate the local population.

Shan has a rare spirit. He survived months of torture and fierce questioning when he was arrested for probing too deeply into corruption in Beijing. Serving an indefinite sentence he has endured 3 years in the brutal work camp. He has learned that he will never give up.

Shan is gradually discovering his inner God, his soul, under the guidance of an abbott. He joins in the evening prayers around an imaginary altar to which the monks offer invisible gifts.

Over the years he has become reflective:

Shan had become a connoisseur of fear, learning to appreciate its many textures and physical reactions. There was a vast difference, for example, between the fear of the torturer’s bootsteps and the fear of an avalanche descending on an adjacent work crew. And none compared to the fear that kept him awake nights as he searched through his miasma of exhaustion and pain, the fear of forgetting the face of his father. In the first days, during the haze of hypodermics and political therapy, he had come to realize how valuable fear could be. Sometimes only the fear had been real.

A headless body is discovered on the brigade’s worksite wearing real American jeans. Shan is brought before the fearsome Colonel Tan. The body is of an unknown unauthorized man. The clothes suggest a visitor to the region. A Ministry of Justice team is coming for an inspection and the Colonel does not want an unsolved death of a significant person awaiting them.

Having discovered Shan was formerly a top investigator in Bejing, the colonel wants him to conduct a short investigation and come up with a plausible explanation of the death. If he succeeds Shan can expect a modest improvement in his life as a prisoner. Tan does not realize Shan is an honest investigator no matter the consequences. Yet no matter the pressure on Shan it will be hard to come up with a report of accidental death for a decapitated man.

Shan does his best compiling an initial report within hours that says “the victim walked up a dangerous ridge at night and suffered a suden trauma to the neck …. possible explanations …, stumbled on a rock in darkness, fell upon razor-edge quartz …. fell onto a tool left by the construction brigade”. Even in the show reality of authoritian bureaucracy the explanations are recognized by the Colonel as fantasy.

Shan tries to help by suggesting they identify the victim as Taiwanese to avoid the attention if he was said to be a Chinese American. The Colonel thinks it could work until Shan says the doctor has noticed the head is missing and is unlikely to sign off on the report.

From past experience Shan says there must be a political explanation of the murder. The Colonel learns the monks will not work upon the mountain because of jungpo:

“It translates as hungry ghost. A soul released by a violent action, unprepared for death. Unless death rites can be conducted on the mountain, the ghost will haunt the scene of the death. It will be angry. It will bring bad luck. The devout will not go near the place.”

The colonel seizes upon their reaction to demand a report that “the 404th caused this death as an excuse to halt their work”. Shan is crushed. Such a report would bring harsher punishment on the monks who have become his family. Can he find another explanation that would be satisfactory to the Ministry? He knows the monks would want him to find out the truth no matter the cost to them.

There are deft tidbits of information. Tibetans are derisively called locusts by the Chinese because of “the droning sounds of their mantras”.

The colonel provides him with an assistant, Yeshe, a young Tibetan who had studied in China but has just completed two years of re-education at the labour camp. He has computer skills and is accustomed to dealing with reports. He does not want to be Shan’s assistant but has no choice.

My second post on The Skull Mantra will discuss the investigation.