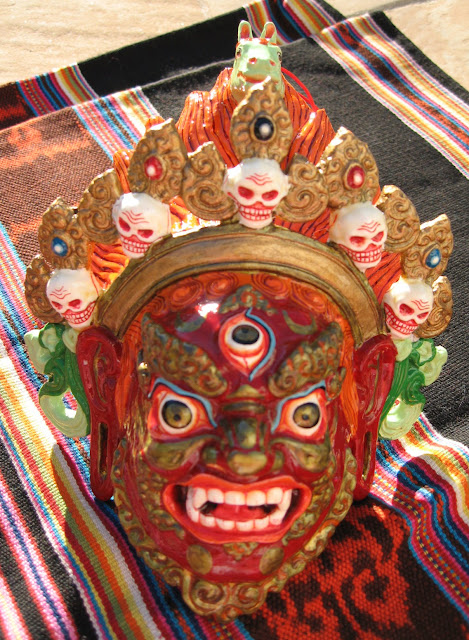 In The Skull Mantra by Eliot Pattison the Buddhist faith is ever present. In Tibetan Buddhism spirits and demons play important roles. In the book a demon, Tamdin the Horse-headed, is involved in a series of murders.

Pattison describes a costume made for the demon protector, Tamdin:

The magnificent costume was here, its face a savage bulging mask of red lacquered wood, four fangs in its mouth, a ring of skulls at its neck, a tiny, ferocious, green horse head rising about its golden hair.

The costume includes arms for the wearers which end in clawed hands.

It is a terrifying sight to encounter Tamdin in daytime, let alone night when he moves about most freely.

Looking around the internet provided examples of the masks used in Tibetan ceremonies.

While I could not find Tamdin masks I found Hayagriva mass. Hayagriva, known as the horse-necked one, is chief among the wrathful emmations in Tibetan Buddhism. 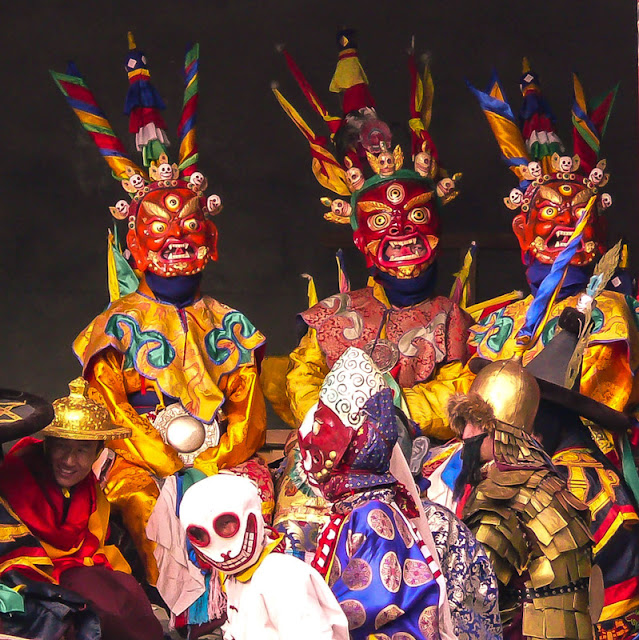 I know little of Tibetan celebrations but I found some dramatic photos of Cham dancers wearing demon masks.

The dances is accompanied by music played by monks using
traditional Tibetan musical instruments. The daces often offer
moral instruction regarding to karuns (compassion) for sentient
beings and are held to bring merit to all who perceive them.

Chams are considered a form of meditation and an offering to
the gods. The leader of the cham is typically a musician,
keeping time using some percussion instrument like cymbals,
the one exception being Dramyin Cham, where is kept using
dramyin.

The term "devil dance" was an early 20th Century Western
description of the performance, its name was derived from the
costumes worn by performers.

What a sight those dances must be in real life. I wish I could attend a cham dance.
****
Pattison, Eliot - The SkullMantra - Begun and Finished and Tibetan Demon Masks