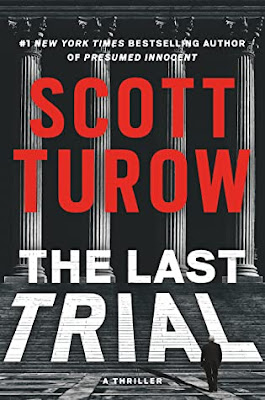 (28. - 1053.) The Last Trial by Scott Turow - (Having practised law for 45 years the prologue pierced me.) An aged lawyer collapses unconscious in the courtroom. (I know of one lawyer who, a few years before I started to practise, collapsed and died in a Saskatchewan courtroom) Lifted upon the table for defence counsel his client, a doctor almost as old, tries to save him:


The prosecutors and the security officer have stepped back. Perhaps they mean to give the doctor room, or perhaps, like everyone else here, they find the sight of the old lawyer motionless on the table, like a Spartan on his shield, stark and horrifying.


The lawyer is Alejandro “Sandy” Stern. He is 85. In his opening address to the jury he tells them it is his last case. Stern has spent 59 years in courtrooms. His emotions are mixed.  Turow delves deeply into the psyche of the 85 year old Stern. (While I have not conducted my last case I identify with Stern.)


At the defence table with him are his daughter, Marta, and his granddaughter, Pinky. Marta and Stern have been partners for decades. While they can be sharp with each other outside the courtroom they are a formidable team within. Pinky, a nail in her nose, has a fine mind and a reckless past that has seen her Grandfather appear with her on numerous occasions as she faces criminal charges, usually related to drugs. She is working for the firm as a paralegal (I do not have my sons with me in trials though each spent a summer with me at the office. Both are now litigators in Calgary. I do have a young woman in our office I am proud to have with me in the courtroom. She is as important to me as Marta is to Stern.)


And now Marta has decided to retire adding further poignancy to the trial. It will also be her last trial. The firm will come to an end.


Stern’s client is Kiril Pafko, a fellow emigre from Argentina. Pafko is a Nobel Prize Winner for Medicine. He shared the Prize with two other doctors for research connecting a mutation in a protein to several forms of cancer. He subsequently founded a pharmaceutical company, Pafko Therapeutics. More recently Pafko led the way in Pafko Therapeutics in developing a breakthrough drug, g-Livia, for fighting lung cancer. It is a drug which saved Stern’s life.


Unfortunately, a number of people have died from allergic reactions while taking g-Livia. Pafko is charged with murder and fraud with regard to the drug. Did he falsify data in a drug trial leading to more deaths? Did his sale of millions of dollars in stock in the name of his grandchildren when he learned of a pending newspaper story on the drug trial breach securities law and constitute fraud? It is a daunting set of charges.


Stern recommended to Pafko that he retain other counsel. Pafko brushes aside Stern’s concern over remaining objective while repreenting a friend of over 40 years and Stern’s recognition that he is not the counsel of his younger years. Pafko is certain that Stern is his best chance at acquittal and will not consider another lawyer. (In real life I cannot see representing a good friend who is facing major criminal charges. The pressure upon the “friend” relationship and the extra stress of representing someone close to you is too great a responsibility.)


I appreciated that Stern’s opponent U.S. Attorney, Moses Appleton, is an upright, even fierce, defender of the court process. Robert Rotenberg also portrays defenders and prosecutors in a balanced way.


It is a pleasure to read a book by a great craftsman. You have no need to be a lawyer to appreciate how Turow creates an intricate trial filled with fascinating characters, important issues and great drama. Turow is a master of guilt ambiguity. Starting with Presumed Innocent where we wonder if Rusty Sabich was guilty or innocent. In The Last Case did Kiril act criminally?


The trial proceeds with the well prepared defence deflecting or minimizing damaging evidence.


Stern must conserve energy. The high level of concentration required during a trial drains him. He does not spend the hours at night in trial preparation that are involved in most trials. (17 years younger than Stern I find myself tired at the end of a full day in court but can still spend the time needed at night though I doubt I would ever conduct a multi-week trial.)


Kiril is determined to testify. However, beyond his legendary charm Kiril has no explanation for several damning pieces of evidence. (Surely Stern and Marta will not indulge Kiril. Were the case in Canada I would have sought a judge alone trial for the subtleties of their legal defences are best presented to a judge. Juries are better suited to cases where the defence is focused on facts.)

(My next two posts will continue the review and my personal comments.