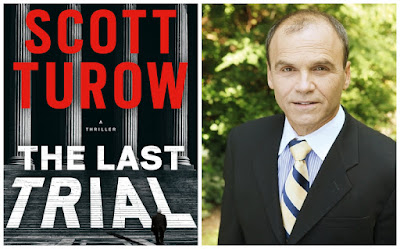 In my last post I started a review of The Last Trial by Scott Turow. I continue that review in this post. I will conclude the review in my next post. All the posts contain discussion of the book and personal thoughts of myself - a lawyer for 45 years.

Turow is outstanding at presenting expert witnesses without getting lost in the technical details.

Regulations on drug testing, the double blind studies and protocols on reporting could be of modest interest but, with lives at stake, Turow makes the evidence compelling. Marta is tasked with questioning the experts. While Turow barely mentions in passing the time needed to prepare such a cross-examination a real life Marta would have spent hours and hours. Her questions blunt some of the force of the experts. (It is a rare circumstance when a lawyer can challenge an expert. They simply have more knowledge of their subject than lawyers. I did have the chance to ask questions of prominent doctors at the Royal Commission of Inquiry Into the Canadian Blood System. Other lawyers were both more interested and capable of asking technical questions. I was able to get some answers on issues important to my clients by asking questions that dealt with the circumstances facing my clients. I sought to personalize what was too often, to my thinking, an abstract process.)

Beyond his skill with presenting complex evidence Turow can maintain, even increase, drama by introducing points of law whose decisions alter the plot. Few authors of legal fiction can sustain interest in legal questions. His explorations of law are clear and concise. It has been a puzzle to me why Turow has not won the Harper Lee Prize for Legal Fiction. The Last Case will be a strong contender in 2021.

In a major criminal trial there will be emotional moments. In The Last Case tension was high when Lep, Kiril’s son and colleague, testified against his father under a grant of immunity from prosecution. His evidence supports the prosecution’s position that his father adjusted the data to remove unfavourable information from the study on the safety and efficacy of g-Livia. (It is hard to watch a child testify against a parent and harder yet to question the child. Few parents want an aggressive cross-examination.)

While cross-examinations may be carefully prepared the best trial lawyers can depart from their plans in an instant when they see unexpected opportunity from the answer of a witness. Stern shows a deft touch in adjusting his questions as he cross-examines a newspaper reporter concerning sources. One of the charges is severely weakened. (I recall a trial where I asked the alleged victim what he had been doing before the alleged assault. To my surprise he said smoking marijuana. I went on to ask how often he smoked and he said 2-3 times a day. Then he started laughing and when I asked if he thought court was funny he said I was a joke. At that moment the judge intervened. It is not hard to imagine what the judge thought of his credibility.)

There was a memorable moment when, after Stern has breakfast and discussion with a lovely 70 year old woman who is an important witness for the prosecution, she kisses him upon the cheek. (I can guarantee I have never had that experience. I have always been reluctant to talk to Crown witnesses but not because they might kiss me. In Canada the defence will always have disclosure of their evidence well before trial. In a pre-trial interview you can do no more than potentially add to the particulars of their evidence. Any actual cross-examination in an interview could be intimidation.)

There was a Hollywood worthy cross examination by the old lion in which Stern, with the aid of some information from Pinky devastates a witness. It was such a rare complete evisceration that Turow had the judge comment it was the first time she had seen such a cross in her decades as lawyer and judge.

As the trial proceeded I saw Stern and Marta minimizing the impact of prosecution witnesses and setting up closing arguments that the State had failed to prove the charges beyond a reasonable doubt but there was misconduct. If not the accused juries like a plausible alternative and the Sterns did their best to deliver.

Despite resting most evenings, as the end of the trial neared Stern is ever more weary, even exhausted. (I know the all encompassing tiredness coming from the tension and concentration of a trial. It is magnified every day a trial proceeds.)

At times Stern doubts himself. Few lawyers do not have doubts on occasion. (At such moments I remind myself that I learned in first year law school you can do no more than your best.)