The Massey Murder: A Maid, Her Master and the Trial that Shocked a Country by Charlotte Gray 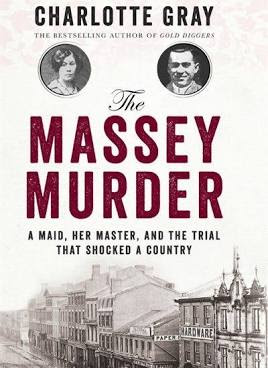 (40. - 1065.) The Massey Murder: A Maid, Her Master and the Trial That Shocked a Country by Charlotte Gray - In 1915 Bert Massey, a Studebaker car salesman but still a member of the distinguished Massey family who were among the leaders of the Canadian Establishment, arrives at his home in downtown Toronto after a busy day at the dealership. As he goes to enter the house 18 year old Carrie Davies, a recent immigrant from England and the only servant Bert and his wife Rhoda can afford, shoots him twice. Massey is dead within minutes. When the police arrive she tells Sgt. Lawrence Brown that “[H]e ruined my character”. Later she states “he tried to ruin me”.

The next morning she is in Toronto Women’s Court where all women being prosecuted in the city appear. It is “a court to which no men were admitted, unless they were witnesses or officers of the court. All spectators, including reporters, had to be female”. I was not aware of Toronto Women’s Court early last century and will have more discussion in a subsequent post. Gray sets out the premise for the Court:

In the early twentieth century, most women and men believed that, while men committed crimes, women committed sins. The LCW (Local Council of Women) argued that, since women could be “saved,” they should be treated differently from hardened male criminals.

The presiding magistrate, the “Beak”, Colonel George Taylor Denison III, had been on the bench for almost 40 years. Imperious and decisive he remanded her in custody.

The public had no knowledge that Bert had no role and no share in the Massey farm equipment empire. His father had died when he was very young and his mother, after taking back her children from grandfather Hart Massey, with whom they had lived for some time, had displeased the patriarch.

The book delves into the lives of middle and upper class women who, while maintaining busy social schedules, were also organizing into groups to advocate for the needs of women. Servants, such as Carrie, had no role even if they would have had any time away from their long hours of work. Another section explores the lives of servants. It was interesting to learn about the efforts of  well-to-do women and the misery of servants but the sections could have been shorter.

I expect the detail was partly because there was so little information about Carrie. As an example she refused to name her soldier beau.

There was just a whiff of condescension with regard to Carrie as the author wondered if she had the ability to understand the legal proceedings.

As the trial swiftly approached the Massey family, determined to avoid scandal, assert Cassie had a history of mental instability and must have been temporarily insane, perhaps over not hearing from her young man serving in the Canadian Army in Europe. They stoutly deny any indiscretion by Bert.

Carrie had an excellent lawyer in Hartley Dewart, K.C. He was eager to play “the coveted role of defender of wounded womanhood”.

How Cassie would pay for an expensive lawyer was partially resolved when the Evening Telegram supported a fund raising subscription for Carrie.

Incredible by current legal processes the trial for murder was held within 3 weeks of the killing.

At the trial Dewart placed the victim on trial. Bert’s prominence was turned against him. Lecherous conduct towards her was recounted by Carrie to explain her actions. Nothing was more important to her than her virtue.

Dewart reached oratorical heights with a closing address could not have been more dramatic.

He said Bert’s advances upon her gave Carrie but “one alternative choice. If she did not defend herself against this man she would have been a fallen woman, an outcast, one more sacrifice to brutish lust”.

And then he paused for a minute - 60 seconds of silence - an eternity in a crowded courtroom with the jury intent upon Dewart and Carrie as they contemplated his words.

“Let that sink into your mind. It was not manslaughter, it was brute slaughter!”

Dewart draws the jury into the mind of Carrie on that fateful day. Her fear growing throughout the day that she would face a renewed assault upon her virtue when Massey returned.

Amazingly he calls upon patriotism, Canada’s soldiers fighting in the Great War in support of Carrie:

“It was the honour of Britain for which they fought. If honour was the principle for which British troops and the prisoner’s soldier lover were fighing was not the prisoner herself fighting similarly?”

He calls upon the jurors’ sense of duty to acquit Carrie:

“Look the facts in the face. You have a wife, a daughter or perhaps a sister at home. You are married men and have children. Can you look them squarely in the face and with a clear conscience say that you had done your duty in the case if you leave a stain upon this girl by your verdict?

My next post will further discuss the case and consider Carrie’s case in the context of another contemporary case of a young woman facing potential murder charges. And the post will reveal the verdict.

Gray, Charlotte - (2020) - Murdered Midas (A Millionaire, His Gold Mine and a Strange Death on an Island Paradise) and The Trial of Freddie de Marigny for the Murder of Harry Oates