The Department of Sensitive Crimes by Alexander McCall Smith 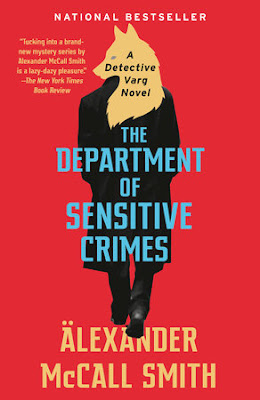 Ulf loves his “ancient light gray Saab” car gifted to him by an uncle and sums up the car as “... perfect. Real leather. Everything works. Everything.” Driving this wonderful car may be more therapeutic than his sessions with a psychoanalyst for a drive relaxes and refreshes Ulf.

The team from the Department investigates a stabbing of a market trader in an “unusual locus” - the back of the knee. The victim Malte is an honest man with eczema who is a Harley-Davidson aficionado. Malte’s wife, Mona, is “the one who decides what they do, generally”. The team swiftly determines Malte was stabbed through a slit in the back of the tent housing his market stall.

Puzzled about the crime Ulf uses “thinking time” to ponder the case. With little physical evidence and no obvious suspect he turns to my favourite crime fiction question - “why”. Some more thought and he decides to focus on what is unusual - why was Malte stabbed at “knee level”.

A deepening friendship with Anna, a member of the Department, troubles Ulf for he is a virtuous - a work not often used in the 21st Century - man whose sense of honour prevents him from an intimate relationship with Anna who is long married to Jo and has two children. Confirming her comment that they need to have only a friendly professional relationship Ulf says:

“I’m very sorry,” he said. “I spoke out of turn. Forgive me, it was my fault entirely. I was forgetting that some things simply cannot be, no matter how much one might wish otherwise.”

In his innate sensitivity Ulf is a gentleman.

I was struck by how sensitive the officers were in their investigation. They are as concerned about the victims and the criminals.

It took me over 100 pages ro realize these sensitive investigators deal with sensitive people undergoing sensitive experiences. There is nary a hint of the hard boiled nor the bleakness of noir in their cases. Humans struggling in loneliness occupy their investigations. The investigations, ostensibly about solving crime, are really efforts at restorative justice to correct a wrong with sensitivity for all involved.

The Department is aided by a regular police officer, Blomquist. He lacks sensitivity. He is less insensitive than oblivious. He is a keen observer who cannot resist expressing his observations which are supported by his immense knowledge of trivial facts. Listeners glaze over as he opines on high intensity exercise and the benefits of unpeeled potatoes. I read of the earnest Blomquist with a touch of uneasy. My personal success in trivia contest reminds me I have a lot of trivia in my mind.

And then an investigation veers into a person of interest borrowing books on lycanthropy (a man turning into a wolf). Can she believe her hirsute husband is a werewolf? For Ulf Varg whose first name and surname both mean wolf the subject is a touch jolting.

McCall-Smith is clever, with a style that is neither parody nor condescending, but conveys an ironic amusement concerning the decidedly non-busy Sensitive Crimes Unit. The back cover blurb from the Philadelphia Inquirer - “Droll, droll, droll” - is apt. I have the next in the series on my desk and will read it soon. It is hard to explain why I have not read an author I greatly enjoyed in 2004 for 16 years.